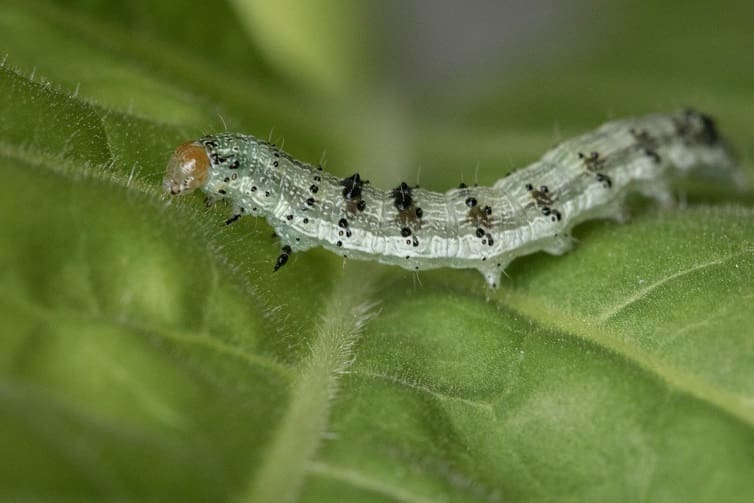 DAMAGING the gut lining of insects is one way plants defend against being eaten.

Plants may induce “leaky gut syndrome” – permeability of the gut lining – in insects as part of a multi-pronged strategy for protecting themselves from being eaten, according to researchers at Pennsylvania State University in the United States.

By improving our understanding of plant defences, the findings could contribute to the development of new pest control methods.

“We found that a combination of physical and chemical defences in corn plants can disrupt the protective gut barriers of fall armyworms, creating opportunities for gut microbes to invade their body cavities,” postdoctoral scholar in entomology Charles Mason said.

“This can cause septicemia, which can kill the insect, or simply trigger an immune response, which can weaken the insect.”

The researchers reared fall armyworms in the laboratory and inoculated them with one of three types of naturally occurring gut bacteria.

They fed the insects on one of three types of maize–one that is known to express enzymes that produce perforations in insect gut linings; one that is characterized by numerous elongated trichomes, or fine hairs that occur on the surface of the plant and help defend against herbivores; and one that has just a few short trichomes.

The team used scanning electron microscopy to evaluate the impacts of the various bacteria and maize types on the integrity of the fall armyworms’ gut linings.

The scientists found that the presence of all three types of gut bacteria decreased the ability of fall armyworm larvae to damage maize plants, especially when other defences–such as elongated trichomes and enzymes, both of which can perforate gut linings–were present.

However, the species of gut bacteria varied in the extent to which they weakened the insects. The results will appear in the July 22 issue of Proceedings of the National Academy of Sciences.

“Our results reveal a mechanism by which some plants use insects’ gut microbiota against them in collaboration with their own defences,” Mason said.

Professor and head of the Department of Entomology, Gary Felton, said the results should have broad significance towards understanding the ecological function of plant defences.

“In the context of our study, disparate plant defences, such as leaf trichomes and plant enzymes, all require certain gut microbes for their optimal defence against herbivores,” he said.

“Our results predict that the variation in the effectiveness of plant defences in nature may be, in significant part, due to the variability observed in the microbial communities of insect guts.”

The team said the results could help to inform the development of insect-resistant crops.

“It may be advantageous to ‘stack’ plant defences that target the insect gut in order to create a ‘leaky gut’ that exposes the insect to microbial assaults on their immune system,” Mason said.