WESTERN Australian grain growers are being urged to be mindful that early sowing under wet, warm conditions can impact the length of efficacy of pre-emergent herbicides. 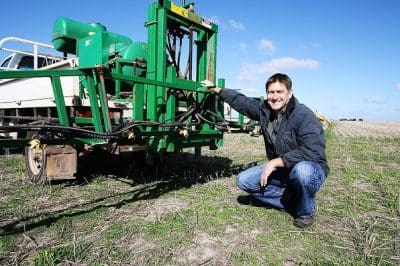 WANTFA executive director David Minkey says the clear message from the trial was not to rely on pre-emergent herbicides to provide adequate control under wet conditions when sowing in April.

The warning comes on the back of a trial conducted by the Western Australian No-Tillage Farmers Association (WANTFA), with funding from GRDC, investigating the breakdown (decay) of pre-emergent herbicides over time.

He said a clear message from the trial was not to rely on pre-emergent herbicides to provide adequate control under wet conditions when sowing in April.

The trial examined pre-emergent herbicides, Sakura, Boxer Gold and TriflurX, which were sprayed onto various (bare) soil types in Cunderdin on different dates and moisture regimes over a two-year period.

“All the chemicals decayed faster than we anticipated,” Mr Minkey said.

“We did the trial early in the season, when the soil was still very warm, and this contributed to the rate of decay.

“If we put the same applications out in late May, they would last a lot longer.”

Results showed the three herbicides decayed slowly in dry soils, but in wet and warm conditions, the rate of decay was the most rapid.

While all were deemed suitable for dry seeding, due to their persistence in the soil over the six-week period, Sakura had the slowest decay rate.

“If you are using these pre-emergent herbicides, be aware that Sakura will give you longer protection than Boxer Gold and TriflurX,” Mr Minkey said.

“Sakura offered the most protection of between four to six weeks, but this will also vary with conditions and soil types, so the protection period could potentially be even longer in some situations.

“However, efficacy was assessed under a non-competitive environment, with no crop sown, which could reduce the protective timeframe.”

The major germination of annual ryegrass in the Cunderdin area was predicted to be around mid- May, so if sowing wet in mid-April, even with significant crop competition, Mr Minkey said most herbicide options would have run-out by that time, with the exception of Sakura.

“With a late April sowing, you would have protection from the major flush with all options, but not later flushes with TriflurX and maybe Boxer Gold,” he said.

“Sakura would give you some protection into early June.”

Mr Minkey said those looking to sow early should select their cleanest paddocks and try to ensure a dried-out surface and sub-surface if there had been rainfall.

Ideally, he urged growers to try and hold-off at least until late April, to ensure pre-emergent herbicide applications would control the main ryegrass germination.

“Otherwise it’s a waste of time and money, and you are also exposing the weed population to a low dose of herbicide, which increases the risk of resistance building.’’

It’s a sentiment echoed by Elders Cunderdin and Dowerin agronomist Nicki Fleay, who said with the season shaping up to be similar to last year, many growers in her region were likely to start sowing early.

She said growers needed to be aware of all their pre-emergent weed control options, as well as being mindful of developing herbicide resistance in annual ryegrass.

“There was a really heavy population of annual ryegrass at the WANTFA trial site and while the resistance status was unknown, it’s going to be an increasing issue in the region,” Ms Fleay said.

“In this area, we’ve got the soil moisture there now and conditions are warm, so we are going to potentially have a few problems later on with ryegrass germination.

“Growers need to choose their pre-em options carefully to get the timing right to ensure adequate protection and maximum residual effect.

“I would suggest choosing paddocks carefully if they are going in earlier. If paddocks are dirtier, then a good knockdown is critical.

“We have quite a lot of ryegrass coming up now, so that knockdown is essential – and to use robust rates, but it’s also really important to rotate pre-emergent herbicides and mode of action groups.

“We’ve been increasingly mindful of herbicide resistance and trying to take trifluralin out of the mix where possible, which is where a herbicide like Sakura comes in as it offers that different mode of action.”