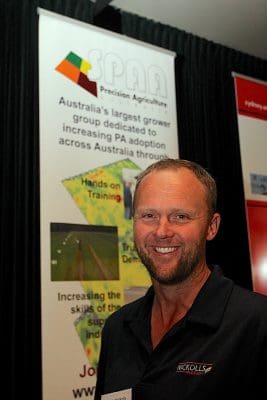 Wade Nickolls at the 19th Precision Ag Symposium, being held this week in Toowoomba.

A graingrower from the South Australian Mallee, where average annual rainfall totals just 330 mm (13 inches) per year, has told how the adoption of precision agriculture techniques has transformed his family’s crop growing success, and more importantly, annual profits.

Wade Nickolls and his family grow wheat and barley on 5500 hectares at Pinaroo near the SA/Victoria border.

About 15 years ago, faced with the challenges of marginal rainfall and an early end to the season in Spring, the Nickolls began utilising the guidance and monitoring technology on their machinery as a means to reduce costs and improve efficiency.

Since then they have gradually introduced yield and elevation mapping, auto steering and controlled traffic, and now use full variable rate seeding and fertiliser applications in response to monitoring data. They have also just invested in a new Weedit spot spraying machine (more on this below).

Their first year tilt at using full variable rate seeding and inputs in 2007 netted them financial benefits of $17/hectare on wheat and $25/ha on barley.

“$17/hectare for us is definitely worthwhile,” Mr Nickolls said.

“The technology is there already on our machines so you’re not spending much more to get those benefits.”

Precision Ag and no-till had made a “massive difference” to the operation, he said.

“Our average rainfall (330mm) used to be the cut off, if we didn’t get average rain we would hardly get a crop.

“Whereas the way we farm now, with no till and precision ag, you can have three quarters of your average rainfall and still do well.

“Last year we had 260mm for the year and we had our best season profitability-wise ever.”

“Instead of the waves being there, we have evened it out more. We really capture it in the wetter years, but in the poorer years we can still get a decent return to keep things ticking along.”

Mr Nickolls’ main message to farmers at the Precision Agriculture Symposium was “keep it simple” and focus on what can deliver the greatest dollar return benefits.

“A lot of people try and make it pretty complex, and they want to make all these maps mean something. But sometimes a map is never going to mean anything to you, it is the wrong year.

“Everyone loves having yield maps, but you have to make sure you do something with them too, don’t just have them sitting on a computer.”

The same message was reinforced later in the day when the key note speaker, US ag tech and data advisor Lisa Prassack, urged farmers not to ‘go all out’.

“One of the things I have noticed with variable rate technology is folks who try to go all in out of the gate really struggle,” she said.

“Start with one, two or three fields, try to get it honed, get a process in place, understand the variability of your assets and how you manage your farm. That is a good way to start.” 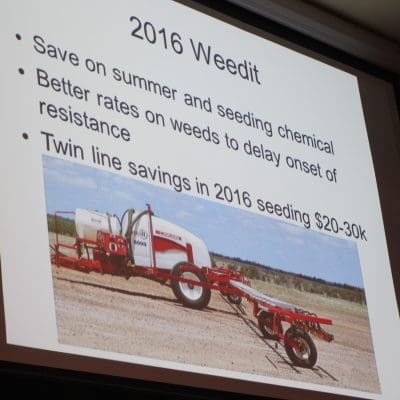 For the past two years they had rented a Weedit unit from a neighbour and were impressed with the results.

The Weedit uses an infrared beam to detect active chlorophyll in weeds. As it moves and identifies individual weeds it directs the required nozzles, spaced 200mm apart, to spot spray chemical treatment from a number of angles to ensure adequate coverage of each weed.

Mr Nickolls said two seasons of renting the machine convinced them to buy one, both for savings in chemical use and in helping to manage potential weed chemical resistance issues in future.

“The cost of the machine is pretty expensive, but we feel over the operation it will pay for itself probably in about five years,” Mr Nickolls said.

“We spend so much on weed control, because we store moisture and we don’t get a lot during the year, so we have to save it all.

“We would easily be putting on $60 or $70 a hectare worth of summer chemical, so if every time you go out you only spend 10pc of that, it will pay for itself.”

Drones could be the next technological innovation adopted by the Nickolls.

Wade said he sees potential in using a drone to scout fields several days after frost events to identify damaged areas which can then be cut for hay.

“Probably for about $2000 you can get a drone and camera to do what we would need,” he said.

“I would love to have one to set on the same path every 2-3 weeks so we can look over the same paddocks.

“It is not from being lazy, it is just another way to look at paddocks. You look at a crop from the ground, then look at it from the spray rig, then from above, you always see different things.”