UNDERSTANDING what lies beneath the soil surface and using that knowledge for productivity gains is at the heart of a massive precision agriculture program currently being implemented on Hassad Australia’s properties across Australia. 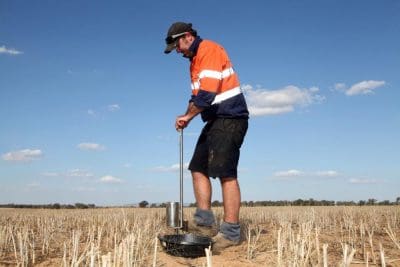 The 18-month project involves an in-depth study of more than 40,000 hectares of cropping and grazing land across New South Wales, Victoria and Western Australia.

Dubbo-based senior agronomist for Hassad Australia, Scott Ceeney, said the work would give them a better understanding of the capability of their assets, leading to better decision-making, and assisting in more accurately targeting productivity gains.

“On some of our farms the program has been very successful very quickly, and on others we’ll need to dig a bit deeper,” Mr Ceeney said.

“As an investment, we’re confident it will pay for itself over time with increases in long-term productivity.”

Hassad Australia accumulated its properties between 2010 and 2014 and not a lot was known about the soils before the mapping work began.

“One of the objectives was simply to understand our assets better.”

“All our properties are large and diverse and in some cases, we’ve aggregated a number of properties side by side with vastly different management histories.”

Collecting the data involved PCT staff driving up and back across the properties on 36-metre widths, continuously taking readings with the electromagnetic and gammaradiometric sensors.

The recordings from the survey were used to create surfaced maps of each of the four depths of sensitivity from the DualEM and four bands from the gamma radiometrics.

The maps indicate changes in the soil profile conditions which can be driven by both physical and chemical soil characteristics, including changes in texture, depth of soil and subsoil constraints like excessive sodicity and chloride.

“When we’re working with customers like Hassad Australia, we’re helping them learn more about their farms and the nature of variability, and how it affects production and profitability,” Mr Wells said. 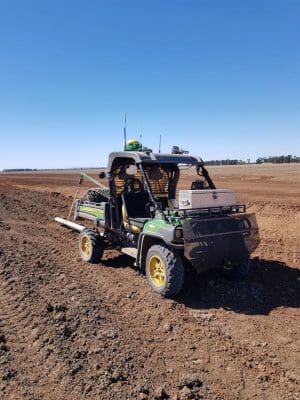 “Precision agriculture can be viewed as an extension of good agronomy. Generally, it’s used to lift productivity through correcting limiting factors in poorly performing areas and more significantly, to identify the best growing environments for opportunities to drive profit even higher.”

Mr Wells said the process often started with farmers picking up variability on a yield map and looking to find the cause.

By analysing changes in the soil environment, they can see and statistically analyse if there is a correlation with the yield map.

“Changes in soil conditions are often the major driver behind the variation in production within a field or farm.”

“Soil sampling and soil testing is the next step, to provide an objective measurement of these changes.

“While the soil sensor maps define where soil is changing, it is essential to determine the real nature of this variability and its agronomic importance.

“Our software has an enormous amount of power to build information and new knowledge, but to find out what is going on, you still need to get in the field, have a look and soil test.”

With Hassad Australia, for example, the initial scanning and mapping process provided a clear guide for testing.

PCT provided Hassad Australia with a detailed prescription for soil sampling, down to individual GPS points for each soil core.

“It showed how many samples we needed to take for each test to be representative and exactly where they should be taken from,” Mr Ceeney said.

Around 2500 soil tests have already been taken as part of the program.

Mr Ceeney said the company was 75-per-cent through the soil-testing component of the project, and results were already prompting changes.

“We are looking closely at some areas of continuous cropping country that may be better utilised under perennial pasture because of high chloride results.”

“In other cases, we’ve changed crop rotations because the soil profile and crop type weren’t compatible. We’re also targeting a larger range of fertiliser products and seeing some promising responses.”

Nutrient Advantage was selected for the analysis work for its consistency and reliability. 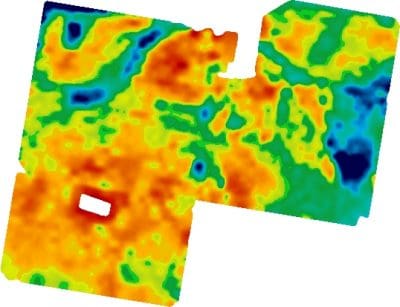 Maps like these define where soils change and guide soil testing. This shows the electromagnetic survey data for a paddock to a depth of 125cm.

“There’s a progressive learning that comes from sampling and testing and we use Nutrient Advantage for regular soil testing on all our east coast properties,” Mr Ceeney said.

Hassad Australia’s farm managers also conduct a range of nutrient response trials each year and these are supported by soil testing and satellite imagery.

The commitment Hassad Australia is making to soil surveys and soil testing is an excellent base for ongoing success, according to Cowra-based Incitec Pivot Fertlisers agronomist Jim Laycock.

“Soil testing is still the best way for farmers and their agronomists to understand their most valuable asset, their soils, as well as better manage fertiliser inputs for productivity and profitability,” he said.

“Growers can use soil testing in a range of ways, for short term goals in next season’s crop, longer term management of the farm or for precision agriculture applications.”