Precision planter with a mind of its own debuts at Dalby

A GIANT double-disc planter equipped with so much precision technology it almost thinks for itself has revolutionised the farming system on a large feedlot and cropping enterprise on Queensland’s Darling Downs. 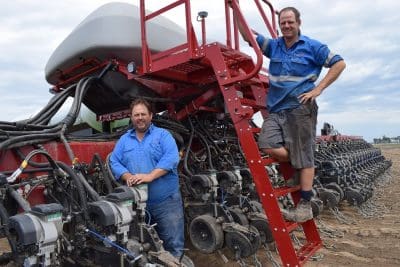 The 24-metre precision planter was pressed into service earlier this month on 2600 hectares of farming country on Mort and Co’s Grassdale Farm between Dalby and Cecil Plains.

The machine is based on a toolbar from American Made Equipment (AME) in Eldora, Iowa, which has been fitted with Case IH running systems and mini hoppers, Precision Planting electric drives, Delta Force downforce and  Shoup row units.

Shipped to Australia in three containers and assembled at Grassdale, the planter cost, all up, over $500,000.

It has already sown 600ha of single skip, dryland cotton and will soon move on to the farm’s double skip cotton program.

After that, it will be utilised to sow 400ha of sorghum on Grassdale and additional areas of sorghum and mung beans on a second property 50 kilometres away.

By Christmas it will have sown 1800ha of summer crop, then in February/March will begin an extensive fertiliser application program before moving on to plant next year’s winter crop.

Grassdale farming manager, Matt Waye, said the high-tech machine had added a new level of planting precision to the farming operations and had dramatically reduced labour and equipment requirements.

“We used to run two, 12 rowers and a third broadacre planter, all on 12-metre configurations. That took four people and two tractors to work them. The idea was to come back to one larger horsepower tractor and one planter,” he said.

Mr Waye said after researching the options for 24m planters last year, the decision was made to purchase the unit through Precision Seeding Solutions at Premer in north-west NSW.

It was only the second of its type to be imported into Australia.

“Ultimately why we selected this bar was its ability to move row units because it is a T-bar configuration, and the ability to put after-market products on it without doing a whole re-install,” he said. 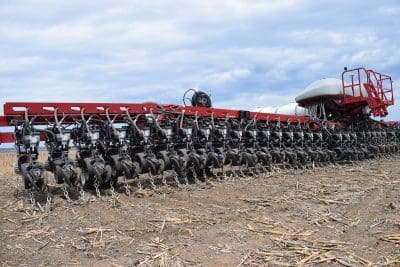 The 24-metre machine has a T-bar configuration.

Among its sophisticated capabilities, the machine can be pre-programmed to apply variable rates of seed and fertiliser on the go without the need for any operator intervention once the data has been loaded.

But it is the sowing and seed placement accuracy that puts the machine into a new era of farming precision.

Mr Waye said that was partly achieved through the machine’s Delta Force capability which controlled the down forces on the double-disc planting units and gave individual down force control on each row.

“The biggest winner for us is down force. We have red sandy ridges through to soft box black soil, so it is all about sidewall compaction and maintaining ground contact. You want to make sure it is in to the depth stop, not to where resistance meets it,” he said.

“We can program in a down force. If we want 14 kilograms of margin over and above what the row unit weighs at 60kg, we can put 74kg on the load pin all the time.”

Mr Waye said another plus was the V-drive metering system which provided seed spacing accuracy.

“Every row is fed from the central commodity box. It is blown by fan by venturi into each mini hopper. There is an internal bar vacuum for the precision planting that sucks the seed onto a seed plate. That is driven electronically, so the computer controls the speed it turns to give the precise seeding population, such as one seed every eight centimetres. Very rarely does it miss,” he said.

“The added singulation the new planter offers has been making a difference on our farm. Rather than having two and three seeds in one spot we are getting one seed every 12cm in our sorghum and every 8cm in our cotton. It is all about precision and placement.”

Another feature is the planter has its own steering system independent of the tractor. 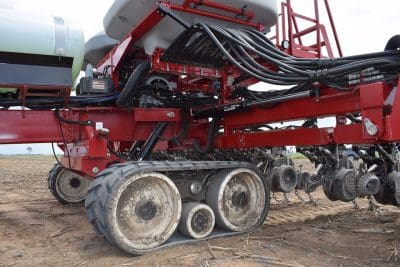 “We have gone for a steerable track system so we can offset off the plant line. You can program an offset into it and it will steer itself out there and stay out there,” Mr Waye said.

“It just takes the pressure off the tractor trying to get everything on the right spot.”

Mr Waye said they were in the process of fitting the machine with a vApply HD liquid fertiliser application control unit that would give row-by-row control.

“It works with a V-drive. The V-drive is all swath control (a GPS-based control system that reduces the effects of overlapping) so as soon as a row is overlapped it will turn off and it will turn the liquid off as well. We will use it to apply liquid fertilisers as we are applying solids in a band underneath the row unit,” he said.

On Grassdale, the new machine is pulled by a Case IH Rowtrac 400 horsepower (300kW) tractor, but Mr Waye said it was not needed so much for the horsepower to pull the unit but more so for its size. 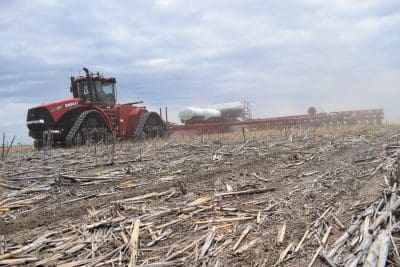 On Grassdale, the new machine is pulled by a Case IH Rowtrac 400 tractor.

“It is more for the weight on the tongue of the drawbar. The toolbar fully laden weighs about 20 tonnes. We are a big believer in tracks in controlled traffic, so we are set up on three-metre controlled traffic system. The tracks leave a flatter track not flared out like you get with wheeled machines,” he said.

The machine folds forward to under 5m in width for transport at the push of only one button.