PRODUCTIVITY growth in the Australian broadacre cropping sector has slowed in the past two decades, challenging growers to find new ways to maintain viability. 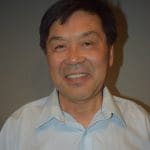 According to analysis from the Australian Bureau of Agricultural and Resource Economics and Sciences (ABARES), from 1977 to 1996, productivity growth on cropping farms averaged 2.5 per cent per annum, but slowed in the mid-1990s and has since averaged only 0.3pc (Figure 1).

ABARES productivity section manager, Shiji Zhao, told delegates to the Australian Agricultural and Resource Economics Society (AARES) conference in Brisbane that a similar rate of slowdown had been identified in other countries such as New Zealand, Canada, the US and western Europe. 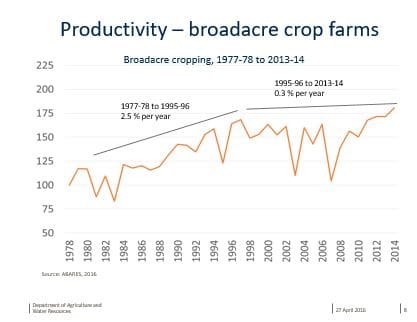 But, while there were some common factors, Australia’s situation had its own peculiarities.

“For Australia, drought is a factor. But drought doesn’t explain all the slowdown,” he said.

“It appears that a slowdown in public investment also explains part of the slowdown.

“And to what extent did climate factors influence the change? Even after we do the adjustment for climate factors, the slowdown is still obvious (Figure 2). That means that if the slowdown continues we will face a bigger challenge to attract more investment, innovation and technologies.

“In the longer term, it is the technology-induced innovation that is the fundamental driver of sustained growth of productivity.” 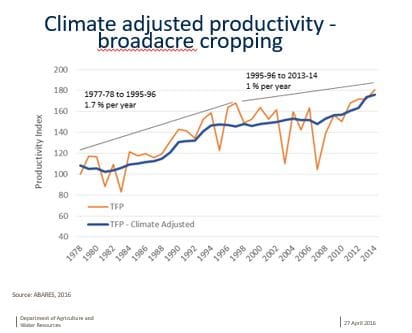 Mr Zhao said over recent decades, change in farm size and the structure of the industry had also been a driver of changes in productivity.

“The number of farmers in the industry has declined and the average size of the farms has increased in the last couple of decades,” he said.

Mr Zhao said productivity growth in the overall broadacre sector, which included the cropping, mixed cropping/livestock, beef, sheep and dairy industries, was volatile because it was influenced by seasonal conditions which caused year-to-year movement.

He said while productivity growth across the broadacre sector had generally slowed, an increase around 2000, was not caused by increasing production output.

“Growth of productivity was actually caused by a reduction in inputs (Figure 3). The decline in the use of labour was most significant at 2.1pc a year. Services, land and capital all declined, but the use of materials increased a lot. Materials include chemicals and seeds,” he said.

“Interestingly, some of the materials embodied quite a lot of technology. So, to what extent can the growth in the industry be attributed to the technologies?” 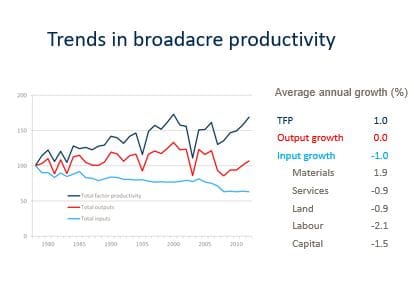 The cropping sector was the only one among the broadacre industries to show an increase in inputs from 1977 to 2015 (Figure 4). 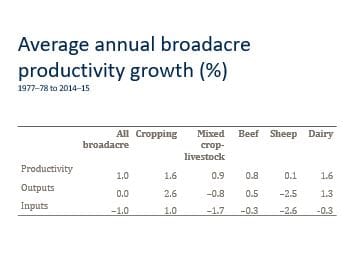 “Compared to the US and Canada, Australian broadacre productivity is lower because our soils and climate conditions are less favourable for farming. However, in the last five decades we have done well with growth, even compared to the US. We are catching up,” he said.