With a co-investment by the Grains Research and Development Corporation (GRDC), the Department of Agriculture and Fisheries’ (DAF) Coastal Farming Systems team will plant commercial soybean varieties in focus paddocks in the three key regions of Bundaberg, Mackay and the Burdekin.

Principal Farming Systems agronomist and project leader Neil Halpin said the focus sites would be used as a practical learning experience for growers.

“For the soybean industry to expand and thrive in high rainfall coastal zones, growers need to fine tune their agronomic skills to ensure they can consistently produce a high-quality product,” Mr Halpin said.

“This project will develop a pool of experienced growers though upskilling on soybean agronomic practices, harvesting and storage skills.

“The key focus is achieving and maintaining high grain quality to ensure growers can optimise their product and guarantee the reliability and credibility of the soybean industry in these new and emerging cropping regions.”

Minister for Agricultural industry Development and Fisheries and Minister for Rural Communities Mark Furner said there was potential to grow a $30 million industry in existing and emerging cropping regions.

“This project is all about making soybeans and sugarcane the perfect partners in the paddock—growing the grain legume and sweetening the bottom line for sugarcane farmers,” Mr Furner said.

“Soybeans complement sugarcane farming systems both agronomically and as an additional income stream, and there’s been a big increase in the use of soybean as a rotation crop in the sugar industry in the past decade.

“Queensland is well placed to meet a much higher demand for soybeans as a plant protein in the future, by increasing soybean cropping in sugarcane fallows.

“In the past five years, we have produced an average of 21,680 tonnes of soybean per year with a gross value production of $14.5m.

“The projected future demand is 200,000t of soybean per year for proposed new Australian processing facilities.

“This project aims to increase average soybean production in Queensland’s high rainfall coastal areas by 100 per cent by 30 September 2024 through increased productivity and expanding the area planted.” 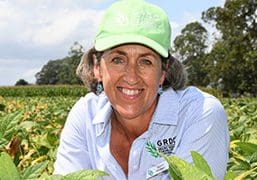 GRDC senior regional manager – north, Gillian Meppem said the strategic project was focused on taking research and development and delivering it to growers in a way that instilled confidence in trialing new or non-traditional crops in the coastal Queensland region.

“GRDC has been supportive of increasing grain production in non-traditional areas by ground-truthing or testing known research at local levels so growers and advisers understand how outcomes can be applied on-farm in different regions,” Ms Meppem said.

“Being part of this project with DAF is an opportunity to assist growers make informed on-farm decisions.

“We know canegrowers are interested in soybeans for the extra cashflow, weed control and nitrogen fixation benefits and for the fact they can also be a strategic break crop for diseases.”

Currently, the majority of soybeans produced in north Queensland are ploughed back into the soil as highly productive green manure (in rotation) with sugar cane and some other crops.

Approximately 25pc of Queensland soybeans are sold for crushing (for human grade edible oil), while the rest are sold as edible whole with the majority exported to Taiwan, for abour $100 per tonne above crushing grade.