REAL time protein mapping technology may provide the missing link for growers looking to better identify the causes of lost revenue in their paddocks and capture protein premiums with grain sales more frequently. 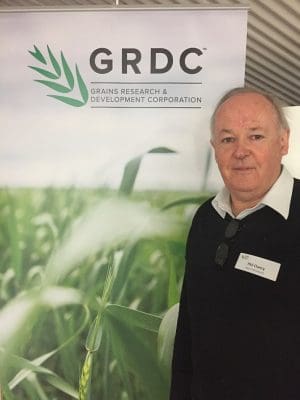 Phil Clancy says farming is about converting water into grain and this can be helped by combining yield and protein mapping.

Developed by Australian company, Next Instruments, The CropScan 3000H On Combine Analyser was one of the key presentations to growers and agronomists at the Grains Research and Development Corporation (GRDC) Updates at Pallamallawa, in northern NSW recently.

Developer Phillip Clancy said protein mapping would complete the story on soil and plant performance that was only partially provided by yield mapping.

“Yield mapping has provided significant improvements in productivity and profitability, but by combining yield mapping with protein maps, growers can more completely understand the variations that occur across the paddock,” he said.

“They can then use variable rate fertiliser applications to achieve the optimum yield across fields. Real-time protein data can then help to determine where in the field nitrogen should be applied and at what rate.

“High yield and high protein indicates that the plant has reached its full potential – the ‘sweet spot’.”

One grower in South Australia has combined yield mapping with a protein map to show that the problem with yield was there was insufficient nitrogen available in the emergence and tillering stages, but there was enough nitrogen for the growth stages of sections of the crop.

“In other sections of the same paddock, the yield was high however the protein map shows that the average protein level was lower than expected,” Mr Clancy said.

“As a result of the analysis, it was found the grower was leaving approximately $10,000 value in the paddock because he did not achieve the optimum yield and protein grades.”

Real time protein mapping works whereby near infrared (NIR) light passes through a sample of grains as they are being harvested, and is transmitted to a NIR spectrometer located in the cabin.

Data is then sent to a cabin mounted touch screen personal computer where calibration models are applied for protein, moisture and oil.

As the harvester bin fills with grain, the bin protein averages are displayed in real time so that the operator can make decisions about segregating grain or selectively stripping different parts of the paddock.

Mr Clancy said the second major use of real time protein mapping was as a tactic to maximise protein grade payments and was already generating significant profit gains for many grain growers.

“One grower using the technology for in-paddock blending noticed a variation of up to five per cent in protein levels across one paddock,” he said.

“He was able to monitor protein levels as the bin filled and switch to a lower or higher protein section of the field until the bin average reached 13.5 per cent. He reported that every load was accepted as APH1 grade which at the time attracted a $30 per tonne premium.

“This practice generated an estimated additional $40,000 in grain payments across the farm.

“In a slightly different application, another farmer in NSW is using real time protein data to segregate grain by protein level before it is stored on farm. The protein, moisture and weight of every truck load that is stored into each silo is recorded by the system and is made available to their grain marketing consultant.

“Grain is then marketed from each silo with confidence that the protein will meet the buyer’s requirements. This system has led to higher prices received per tonne and no costly rejected loads for the grower.”

For more details go to https://grdc.com.au/resources-and-publications/grdc-update-papers/tab-content/grdc-update-papers/2017/07/on-the-go-protein-sensors-using-real-time-protein-data-for-more-profitable-marketing-aggregations-and-nitrogen-decisions