WHAT is believed to be Australia’s first research program directed at finding ways to control a major pest of stored pulses is about to get underway in Queensland.

Queensland’s Department of Agriculture and Fisheries (DAF) is preparing to undertake the two-year research program to address knowledge gaps in pulse storage, and develop a best-management practice package for growers.

“Priority research areas will concentrate on developing effective fumigation and aeration protocols for insect pests of stored pulses, with a special focus on mungbeans and chickpeas,” a DAF spokesperson said.

A major focus of the research will be the cowpea bruchid, a beetle which attacks cowpeas, field peas, mungbeans and soybeans in-crop, and while a naturally occurring compound, malic acid, usually protects chickpea pods from the pest in the field, bruchid insects can attack chickpeas in storage.

The research has been welcomed by industry (more below) and is considered timely in light of the amount of pulses likely to be put into storage given lower prices. 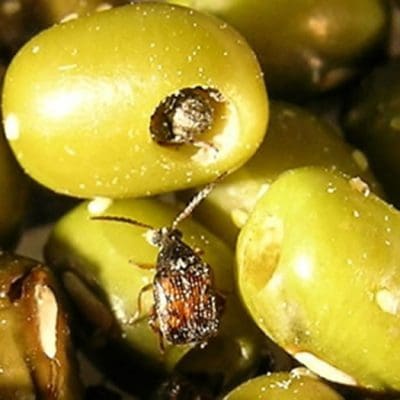 Cowpea bruchids are a threat to stored pulses.

The announcement follows an election commitment made in 2017 by the Queensland Government, and is believed to be the first storage research aimed specifically at pulses in Australia.

“It is important to understand that the election commitment is about minimising the impact of insects on stored pulses.”

This includes research on the impact of aeration cooling on pulse pests, but does not include research on aeration drying.

“However, DAF is open to exploring collaborative partnerships with industry to undertake research and development to develop equilibrium tables in future projects.”

With pulse prices at their lowest point in recent years, pulse and storage specialists in all states have welcomed the Queensland Government announcement.

This is because the depressed pulse market means growers are more likely to store pulses and sell cereals for cash, the inverse of what happened in 2016 and 2017.

Australian Mungbean Association president, Mark Schmidt, said he believed the Queensland Government funding to be first to be dedicated specifically to pulse-storage research.

“It’s really good news, because bruchid is a major pest in storage of mungbeans, and can downgrade their value by $200 per tonne,” Mr Schmidt said.

“Aeration is very much part of good storage, so any research in that area looking at pulses is going to benefit the industry.”

“The universal core principles of maintaining quality in storage are about managing temperature, moisture, bugs and time,” Mr Kotzur said.

These principles apply equally to pulses, however, less is known about pulse storage than the major commodities.

“Moisture migration over time in a closed space generally tends to result from excess moisture combined with temperature imbalances.

Mr Kotzur said specific research on pulses storage would help industry preserve value in stored product for greater marketability and outturn in the months after harvest.

“The major gap in our knowledge is that we do not have up-to-date isotherms for the current pulse varieties and agronomy in Australia.

“We can better design aeration control if we use isotherms to show the relationship between seed moisture, the interstitial air space, humidity and temperature,” he said.

Equally as important as the information itself was conveying best practice through agricultural extension, particularly in respect of aeration cooling and attention to moisture by growers who may previously had a bad experience.

One industry source said such growers still won’t have complete confidence in storing pulses until they get some experience or learn correct methods through industry extension.

The Queensland Government is exploring opportunities for projects through the Cooperative Research Centre for Developing Northern Australia which will support a significant expansion of the mungbean industry in North Queensland.

Expansion is already taking place, with growers in areas like the Burdekin, which have traditionally supported sugarcane monocultures, now starting to branch into mungbean production with an eye to selling into the containerised export market.