SIMILARITIES between Canada and Australia in pulse production and markets abound, but in their research-and-development (R&D) models they vary greatly with Australia holding the upper hand. 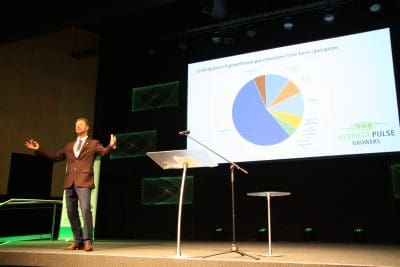 It was one of the messages from Alberta Pulse Growers’ (APG) policy and programs specialist Nevin Rosaasen in the first keynote address at the third triennial Australian Pulse Conference (APC2019) in Horsham last week.

Entitled Australian and Canadian pulses: Commonwealth competitors or scientific collaborators, the address highlighted one of the challenges facing Canada as the erosion of public funding into research and development (R&D).

This was in marked contrast to Australia, where the Grains Research & Development Corporation (GRDC) deploys Federal Government funds and grower levies with private investment and state governments to drive breeding and agronomic research.

“There are certain things that private industry will just not step up to do, and that’s where we really need public investment into R&D,” Mr Rosaasen said.

Ahead of this week’s Canadian federal election, Mr Rosaasen said one in seven Canadian jobs was in agriculture and food, but the agricultural lobby’s ability under-represented the sector’s importance, and was not forcing change for the better.

“You would assume that there would be a role for public entities when so much of your economy and so many of your people rely on agriculture.”

The University of Saskatchewan’s Crop Development Centre, which has released numerous pulse varieties since the 1970s, has created what Mr Rosaasen called “a marriage of sorts”.

“This has created a bit of tension amongst the different provinces.”

“However, it’s really difficult without an end-point royalty or a trailing-point royalty in order to capture the value on your up-front investments into plant breeding.”

He said cereal breeders were looking at ways to attract more private investment.

“Whether we like it or not, we’re included in that conversation, and we’re still not sure how this will shake out.

“We’ve gone through about five years of consultation and information, yet the farmers don’t agree, seed companies aren’t in agreement as of yet, and it is going to be a challenge.

“What is the role of public funding into research and development? Or do we go the different models of privatisation?”

Mr Nevaasen said any scientific collaboration between Australia and Canada would involve a four-step process.

“It starts with communication, then you move on to co-operation, then you have to co-ordinate between groups, and collaboration really means you’re using shared resources and funds to get to the same goal.

“The future fields of collaboration in pulse crops, plant breeding…and recognition of public and private investment all play a key role in this area.

“In 10 years from now, we need to make that the functionality of the proteins that we’re breeding for will fit into a 3D printer to print a turkey for a Thanksgiving dinner.

“I do really believe this is where the future of collaboration needs to move.”

While India’s imposition of tariffs on pulses has impacted Australia’s chickpea and lentil exports, Mr Rosaasen said it hit Canada hardest in the yellow-pea market.

“When India closed the door to pulse imports, the impact on Canada was severe.”

He said it caused the largest ever overnight drop in yellow-pea prices of C$1.50 per bushel, or A$55/tonne, and the lowered price stimulated Chinese demand for Canadian peas.

“What saved our Canadian bacon, so to speak, was the fact that China picked up a lot of that excess demand, at fire-sale prices, mind you.

“We do have other parts of Asia that are picking up some of that demand as well.”

Mr Rosaasen said Canada’s lentil market was more diverse, and Middle Eastern countries had helped to pick up the slack left by India’s lack of demand, while Turkey has remained an important market.

While India has historically been the biggest buyer of Australian chickpeas, its market is a small one for Canadian chickpeas. In 2000-01, Canada grew its highest chickpea area of 400,000 hectares in response to Australia’s disease issues which caused widespread crop damage, but its production has now retreated considerably.

“The US buys quite a few of our chickpeas, predominantly kabulis.”

Mr Rosaasen said 90 per cent of Canada’s chickpea production was kabulis with a diameter of 9-10 millimetres.

While Australia had its biggest ever pulse export year of around 2 million tonnes (Mt) in the wake of the bumper 2016 harvest, Canada exported almost 4Mt of peas alone in 2016/17, and has shipped 3Mt or more annually of peas alone six times in the 10 years to 2019/20.

Canada’s lentil exports are also massive, and have hit or exceeded 2Mt per annum in the 10 years to 2019/20.

In Australia, India’s retreat from the market, combined with rising demand for plant-based proteins, has sparked a run on investment in plant-based protein manufacturing, with EAT Group’s Horsham development covering a separate session at APC2019.

Mr Rosaasen said Canada was also looking to value-add its pulses in the current climate.

“We’re hoping that the low prices will spur that value-adding that we’ve also been seeking.

“We’ve also been seeking fractionation plants across the prairies.

“Right now, the internal prices for peas have never been lower and I would suggest that is the time to start fractionating and to build up your domestic industry and value-add it.”

Mr Rosaasen spoke in his address about the “southern cone” of Argentina, Brazil, Chile and Uruguay, as well as Australia, Canada, the Former Soviet Union (FSU) including the Black Sea countries, and the United States, as being the world’s major bread-baskets.

While much has been spoken of in terms of the rise of South America and the FSU-Black Sea as grain exporters, Mr Rosaasen said they had two major disadvantages.

“These regions don’t have the institutional and regulatory capacity that we have come to know in both Canada and Australia.

“Their quality and consistency are somewhat suspect from time to time and usually you’re sourcing a number two…and always competing on price.

“Australia and Canada share a lot more similarities than we think.”

And while Australia may look at the grain-export terminals and rail network in Canada with envy, he said weather and logistics issues sometimes hampered its competitiveness.

He said up to 50 ships could be paying demurrage, some for many weeks, as they waited to get on to the berth in Vancouver to load for Asia.

“Transportation is still one of the biggest issues for Canada.”

Market access also has its problems, not least because of the spill-over effect from the US-China trade dispute, and Canada’s arrest of a Huawei executive earlier this year.

“We’ve had canola, pork and beef shipments turned away from China as a fall-out from the US trade war.”

The ability to fumigate pulse shipments to certain markets including Pakistan was also of concern.

He said the Montreal Protocol, which restricts the use of certain ozone-depleting chemicals often used in fumigation, presented challenges, as did complying with maximum residue levels (MRLs) for Peru and Vietnam when desiccants and herbicides were used.