AUSTRALIA is forecast to produce 229,000 tonnes of chickpeas from the crop now being harvested, according to the latest crop report released by industry body, Pulse Australia. 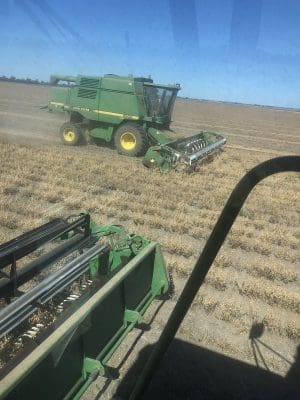 Harvesting chickpeas at Condamine on the western Darling Downs, where some of 2018’s highest-yielding chickpea crops have grown.

The chickpea number is back 24 per cent from Pulse Australia’s previous forecast released in early August, and puts South Australian chickpea production at 17,000t at slightly ahead of the expected New South Wales tonnage.

Central Queensland has this year produced the vast majority of Australia’s chickpeas, and its harvest is almost over.

Some crops have been harvested with respectable yields on the Darling Downs and adjacent regions, and in northern New South Wales, and despite being sown into subsoil moisture, have suffered due to a lack of in-crop rain.

This latest figure chickpea figure shows continues the sharp downtrend in Australia production, with a crop of around 2 million tonnes (Mt) harvested in 2016, a 2017 crop of 1Mt, and a new low of recent years for 2018.

The drops have been tied to seasonal conditions, including some frost damage, which has wiped yields from frosted crops this and last year, and compares with an ideal growing season in 2016.

Production for this season has been extremely hard to forecast, with growers leaving to the last minute their decisions whether to graze, cut for hay or bring through to grain.