A HUGE domestic crop has seen the Indian Government start to limit imports on some pulses, but Australian traders are not expecting these alone to generate big 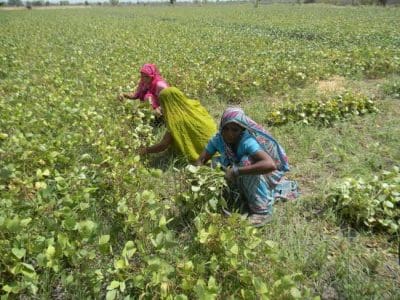 price shocks for Australian chickpeas, lentils and mungbeans harvested or planted in 2017.

Effective for its current financial year which runs until March 31, the Indian Government has this month announced import caps on pigeon peas, the US’ main pulse export, black gram, and green gram as prices paid to farmers in India fall below the designated minimum support price.

Dalby-based Australian Mungbean Association president, Mark Schmidt, said the Indian Government has recently announced an import limit on mungbeans of 300,000 tonnes in the year to March 31, 2018.

“If that’s the case, that could be beneficial to us in Australia, because most of the crop we harvested earlier this year has already been shipped, and our next crop will be coming off between March and May next year.”

“That might be good news for us, because we could be selling into a market where supplies have been run down, and we’re the first cab off the rank.”

Along with China and Vietnam, India is a key market for Australian mungbean exports, which this year accounted for around 90 per cent of the 75,000 tonnes produced; other significant markets include Indonesia, Malaysia, Taiwan and The Philippines.

Mr Schmidt said prices on offer for Australian new-crop mungbeans were around $1000-$1050 per tonne, about $100/t below current-crop values paid at harvest.

He said Associated Grain was seeking clarification from the Australian and Indian governments about India’s mungbean import quota to gauge impact it would have on current-crop tonnage yet to be shipped.

“Some orders that haven’t been shipped might need an import permit, and that’s what we’re trying to find out.”

Mr Schmidt said Burma and China were Australia’s established export competitors on mungbeans, and emerging production areas in sub-Saharan Africa and Argentina were also in the market.

Australia grows nearly all its mungbeans in Queensland and northern NSW, with the early crop planted from mid-October on, and the later crop planted in December-January.

India produces a summer (kharif season) crop of green gram in its north, and a winter crop in the south.

No news on chickpeas, lentils

The Indian Government is yet to announce any import restrictions on chickpeas or lentils and traders said price drops seen since Australia’s 2016 harvest were likely to limit further downside.

“That’s close to one third of what farmers were getting last year, but even at $500, and with a yield of 2-3 tonnes per hectare, it’s not a bad price historically,” Mr Alexander said.

“I’m not too worried about what’s going on in India; a lot can happen over the next few months.”

With Australia, Canada and India all producing large back-to-back lentil crops in 2016 and 2017, traders said prices never looked like holding up at last year’s levels.

Lentils are a key winter crop in southern Australia, as chickpeas are in Queensland and northern NSW.

“Last year, the price was more like $1000-$1100 but at $800, we are still well and truly above the historical average; we’ve been really spoilt in the past few years because India, Pakistan and Bangladesh all had lower production, and we benefited from that.”

Indian Prime Minister, Narendra Modi, has promised to improve farmers’ incomes, but also needs to ensure the country’s population of 1.3 billion can afford to feed itself.

At times like this, when pulse harvests are bountiful, tariffs and import quotas are used by the government as mechanisms of control for its domestic pulse market.

The first pulse the Indian Government capped 2017/18 imports on this month was pigeon peas.

The pigeon-pea quota is 200,000t, which contrasts with India’s import figure of more than 700,000t of pigeon peas in 2016/17; the drop is due to South Asia’s much higher production and stocks carry-out this year.

Australian traders believe the Indian Government’s imposition of import quotas could be a short-term strategy which may change if cheaper product from Australia and Africa can be landed at Indian ports to compete with higher-priced domestic pulses.

“Growers in India need higher prices and the consumer in India needs cheap food; it is the age-old conundrum,” one trader said.