PULSE Australia’s estimate for Australia’s 2017 lentil production has this week been lifted 29 per cent to 540,000 tonnes from the ABARES figure of 419,000t released in its September crop report, while the faba bean estimate has taken a hit, dropping 11pc to 305,000t from last month’s ABARES estimate of 341,000t. 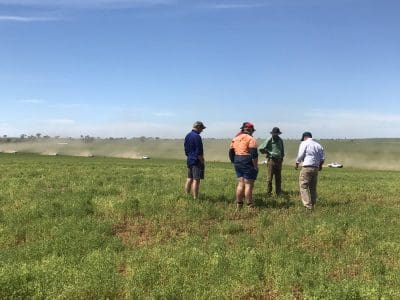 Lentils are growing in popularity in NSW, and have been included on the program at today’s field day at Hart Bros Seeds at Junee in the state’s south. Image: John Kirkegaard

“Lentils will be another big crop, though not quite as big as last year; a lot of them have had excellent conditions,” Mr Bowden said.

Pulse Australia has estimated the area planted to lentils in NSW at an unprecedented 20,000 hectares, five times the ABARES forecast, and most of it in the state’s far south, where in-crop rain has bolstered yield prospects.

However, most of Australia’s lentils are grown in Victoria and South Australia, where ABARES has forecast area at 170,000ha and 180,000ha respectively.

“There was a dry start in the Yorke and Eyre peninsulas, but generally Victoria and South Australia have had a good season.”

The same cannot be said for faba bean crops in most parts of NSW, which like the Queensland plantings, have suffered frosting, moisture stress and heat stress.

“Fabas are sensitive to heat, and as soon as it gets over 25 degrees Celsius, they’ll stop podding or flowering. A run of over 30 degree days has done some damage.”

“Faba yields at one tonne per hectare is what we might end up with; the average might be 2-2.5t/ha in other years.

“A lot of those crops haven’t got the biomass they had last year, and they’ve been hit by frost and then heat.

Pulse Australia’s estimate for the chickpea crop now being harvested stands at 1.18 million tonnes, in line with the most recent ABARES forecast,

“Even with the hot and dry conditions in southern Queensland and northern NSW, chickpeas have hung on amazingly, and the prices are still pretty good.”

Pulse Australia’s latest lupin estimate at 513,000t is 15,000t below the ABARES figure for the crop grown predominantly in Western Australia.

While the Central Queensland chickpea harvest is now nearing completion, the pulse harvest is yet to get going in earnest in southern Queensland and northern NSW, where showers and some storms have slowed activity in the past week.

Mr Bowden said the faba harvest would be under way by mid-November on the NSW plains and outer slopes, but would not start in the higher-yielding inner slopes areas until December in some cases.