HARVEST is about 70 per cent of the way through on this season’s mungbean crop in the northern cropping zone. 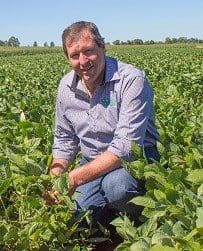 Australian Mungbean Association president, Mark Schmidt, said most growers had been happy with yields, although it had been a season of two distinct crops of differing yields and quality.

“The crops that were planted in December and had rain in March, re-flowered and ended up with a higher yield, but the quality was very poor,” he said.

“The growers who planted in December had two or three crop growths and ended up with poor quality, but higher yields.

“Those who planted in January and harvested just after Easter had beautiful quality.

“So, it has either been processing quality or really poor manufacturing.

“It was encouraging to see higher yields and reasonably good quality for the growers who didn’t get the rain damage in March. It sets us up well for next season, especially when growers get reasonable yields.”

Mr Schmidt said mungbeans were moving through the marketing system quite well.

“There seems to have been nothing going into India due to the import restrictions there, but we have had good buying interest out of China, Indonesia, Sri Lanka and Malaysia, so we haven’t lost out,” he said.

Mr Schmidt said the price had ended up “on track with what was predicted earlier in the year”.

“Processing mungbeans have been trading around $950-$1000/tonne and the manufacturing price has come back a little bit because the quality has been really poor, but it is trading in the $800-$900/t range,” he said.

Mr Schmidt said there were pleasing reports from growers who had grown the new variety, Onyx, which had tended to perform better than the old variety, Regur.

Queensland AgForce grains president, Wayne Newton, said mungbean crops on the Darling Downs had generally yielded well thanks to the combination of dry weather, and then a couple of heavy rainfall events.

“I think most mungbean growers who have had a crop are pretty happy. It has been good weather for harvesting. That’s about all you can say about the current dry spell,” he said.