WHILE the sprouting market for mungbean is only a small segment of the industry, there’s a need for improved varieties to better-meet that market’s requirements, according to Australian Mungbean Association president, Mark Schmidt. Speaking at the Australian Mungbean Association field walk at the Hermitage Research Station near Warwick, Queensland, Mr Schmidt said there were only about 2000 tonnes of mungbean produced a year for the sprouting market, but it was an important value-adding component of the industry.

In addition to the domestic market, there were also international markets available for Australian mungbean to tap into if the right varieties could be developed.

“The Mungbean Association and other industry groups are trying to work out why sprouting mungbeans aren’t always successful. We are trying to improve the varieties,” he said.

“The older variety, Berken, has always been the best variety for sprouting, but it is the worst agronomic variety. So, we are trying to take the technology behind why Berken sprouts better than the others and incorporate that into a new variety that has the growth rates of new varieties with the aim of having higher yielding, better sprouting varieties in the future.”

Parilla Fresh general manager, Peter Duncan, whose company is the largest sprouting business in Australia, said while Berken was the company’s current preferred mungbean variety, he was working with the industry to develop better lines for sprouting to counter some of the current issues, such as charcoal rot.

“Any rot like that really affects our production because if we have any charcoal rot in our products and it gets into our bags of bean shoots, Coles or Woolworths will reject the whole shipment. That costs us thousands of dollars,” he said.

“Our water costs are enormous, so if we are having to chuck out 10 to 15 per cent of the product all the time that is an extra 10 to 15pc we have to grow and water. So, it affects our production costs quite massively.”

Mr Duncan said maintaining a continuity of supply of quality beans was also an important, but sometimes frustrating, consideration in the industry.

“Two years ago we had a really good supply of good quality product.  We went back through the seed companies to the specific growers to say that they had grown just what we wanted and that we wanted that again,” he said.

“The next year they grew what they thought would be the same again, but with the rain and adverse conditions it just didn’t happen. So, it is disappointing for all and affects the profitability of the whole industry.

“That is why we are working with people like the Queensland Department of Agriculture and Fisheries to try to grow specific mungbean for sprouting that will have a lot less charcoal rot, because that will benefit the grower, seed company and us as the end-user.” 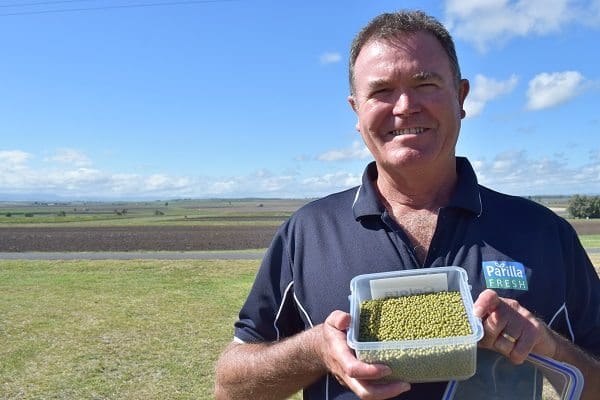 Mr Duncan said only about 3-4 per cent of the population bought and ate sprouts, but it was a growing market with enormous potential.

“We are trying to take sprouts from being an olde-worlde, hippy-type thing to something people will put a punnet of in their shopping trolley every day,” he said.

“There used to be one or two varieties of lettuce, and now there are numerous bags of lettuce and baby spinach you can get at the supermarket.  We are trying to get into that market as well. Sprouts are a healthy product and becoming more acceptable.”

Mr Duncan said Parilla sourced its mungbeans from a couple of seed companies that had strict HACCP food safety management plans in place.

“Sprouts are a high risk, ready-to-eat food, so we have to have really good traceability of the seed back to the paddock,” he said.

“We have to be able to demonstrate to the food authorities we have the capacity not only to show them who we sold it to, but trace it all the way back to the farm and paddock it came from. That is vital to us.”

The lucerne for the alfalfa comes from South Australia, and the mungbean, chickpea and blue pea are sourced from northern NSW and southern Queensland.

“The major customers are Coles and Woolworths. We supply them from Townsville around the east coast to Adelaide, as well as out of the Sydney and Melbourne markets to some independents,” Mr Duncan said.