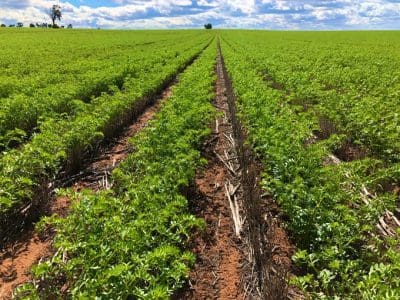 Released to members last week, the report puts the national pulse crop at around 31 per cent below the 10-year average.

With seeded area now set, Pulse Australia chief executive officer Nick Goddard said the size of the 2019 harvest will depend largely on rainfall in the coming weeks.

While much of Victoria has reasonable stores of subsoil moisture, Mr Goddard said Queensland, New South Wales, South Australia and Western Australia will be relying on early spring rain to achieve average yields.

“Unfortunately, the Bureau of Meteorology (BOM) prospects for spring rain are not favourable, and all but WA pulse-growing regions are expected to have a less than 40-per-cent chance of exceeding median rainfall in the lead-up to harvest.”

BOM modelling says subsoil moisture levels show southern parts of Central Queensland (CQ) and most of Victoria, as well as the Esperance zone in WA, as having above-average soil moisture reserves in the second half of August.

Mr Goddard said warmer weather, which has arrived as forecast with spring, and the prospect for below-average rainfall throughout spring in most areas, have already been factored into Pulse Australia’s latest numbers.

“We have tempered this forecast with a strong influence from the BOM projections.”

In its previous June report, Pulse Australia put the top of 2019 pulse production at 1.79Mt.

This was due to the report being issued when the planting window for chickpeas was still open.

“With more confidence in area now sown, knowledge of in-crop rainfall to date, and a window into future rain prospects, we are more confident to provide a single estimate for chickpeas, albeit at the lower end of our earlier range.”

Crippling drought conditions over most of parts of central and northern NSW have reduced its production outlook for chickpeas to a new low of recent years.

While CQ and parts of Queensland’s Maranoa district are looking at average or better yields, many crops in the state’s south either did not get planted due to a lack of timely rain, or have limited yield potential.