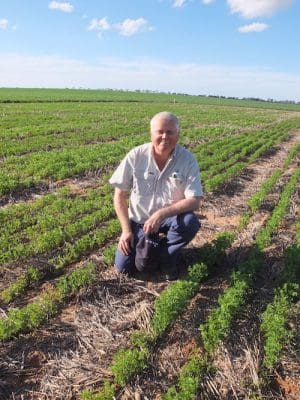 Research to evaluate the performance of several new varieties of lentils is underway on Western Australia’s south coast.

There has been a resurgence in interest in growing lentils in the past two years, buoyed by new more robust, higher yielding varieties and improved prices.

The Department of Primary Industries and Regional Development, together with Pulse Breeding Australia, has commenced a series of paddock trials to assess the performance of 30 lines of lentils, funded by the Grains Research and Development Corporation.

Mr Seymour said historically lentils hae been sown after a cereal program in mid-May, however, he and his colleagues believed lentils may be better suited to sowing after canola, in mid-April.

“We expect slightly longer season lentils – particularly if they have good disease resistance – may have a better fit in growers’ programs if sown in mid-April,” he said.

“However, when we sow early we are likely to produce crops with a high biomass – sometimes too much biomass – which may promote disease. One way to reduce biomass and potentially reduce disease pressure is to reduce plant density.

“To address these ideas we have two sowing dates, one in mid-April and one in mid-May, at Kumarl and Grass Patch, while we are assessing a range of seeding rates at Grass Patch.”

Mr Seymour said the experiments would enable lentil growers to choose a suitable variety and identify any associated risks.

The trials follow on from lentil variety and herbicide trials in 2016 that averaged just under two tonnes per hectare at Kumarl, just over 2t/ha at Grass Patch and close to 3t/ha at Wittenoom Hills.