A lupin crop at Cunderdin in WA. Photo: Nutrien Harcourts

AUSTRALIA’s five major pulse crops are estimated to yield a total of 2.63 million tonnes (Mt) in the upcoming harvest, up 11 per cent on the 10-year average of 2.36Mt, according to Pulse Australia’s August crop forecast.

While forecast lupin production has dropped slightly on the 10-year average, estimates for chickpeas, faba beans, field peas and lentils are all up, with faba beans on 41pc posting the biggest jump.

Rain this month has boosted production for all major winter-grown pulse crops in all regions south of central Queensland.

This has helped to negate the impact of the third-driest June and the second-driest July on record across the country which, coupled with above-average temperatures, had crops struggling to be in a good position to produce biomass in spring.

The primary risk to these estimates is yield loss associated with outbreaks of fungal disease.

Pulse Australia has contacted major fungicide suppliers, who have reassured the industry they are well stocked.

However, stocks will need to be sufficient to cover all winter crops, and pulses may not be the growers’ first choice to spray if fungicide demand exceeds available supplies.

Chickpea production has returned to more typical levels, but key market demand has not.

With India still effectively closed to imports from Australia, Bangladesh and Pakistan will continue to be the major destination markets for desi chickpeas, but will be unlikely to absorb more than half Australia’s new-crop production.

Northern New South Wales will deliver the bulk of the Australian desi chickpea supply this season.

It has had excellent rain in the season to date, and the north-west slopes and inner plains are looking particularly good, and could match the record 2016 yields.

On the Liverpool Plains of northern NSW, crops are also looking strong, while in the state’s north-west towards Walgett, up to 50,000 hectares could yield 1.5t/ha or more.

Central west NSW has a larger-than-average area sown to desi chickpeas and could easily achieve 2t/ha if favourable conditions persist.

Chickpea area is well below average in Central Queensland.

Cereals have dominated area sown in CQ, where growers are eager to retain stubble for summer and next year after two years of drought..

Reduced chickpeas production has been exacerbated by poor in-season rainfall, particularly north of Emerald, where some growers are not spraying chickpea crops for insects as they see little or no value in nurturing the crop through to harvest.

In CQ’s southern districts, crop prospects are better following recent rain, but more will be needed to realise the forecast yield potential of 1.4t/ha.

Rain is likely to accelerate the spread of ascochyta, already evident in the region, so growers are preparing to spray ahead of any impending rain.

On the Darling Downs, particularly the western Downs, crops are faring much better, with 2t/ha yields realistic for the earlier-planted crops that were able to access moisture stored from February rain, but later-sown crops are struggling and need for rain soon.

Throughout Queensland and NSW, the old adage of “rain makes grain” will prevail for chickpeas, as the indeterminant nature of chickpeas will guarantee ongoing flower and pod production if rain forecast by the Bureau of Meteorology comes to fruition.

The risk is the spread of ascochyta brought on by rain, especially where the canopy is thick.

Desi chickpeas are well represented in Victoria, as the market and pricing for kabuli chickpeas did not encourage significant planting.

Excellent conditions in the Wimmera could see yields of more than 2t/ha.

Tough economic conditions in Sri Lanka, recently the major export market for Australian peas with India effectively closed, has cut production by about 50pc, which will likely impact the ability of the market to absorb this year’s higher-than-average production.

The lower pricing, however, could trigger a return by China to the market for Australian peas, as occurred in 2017-18, when China became Australia’s main export field pea market after India.

For NSW, 34,000ha sown and expected to be harvested is fairly typical, with the very favourable seasonal conditions expected to produce strong yields, well above the 10-year average.

In Victoria, recent rain stretching into the Mallee has saved some desperately thirsty crops, which are now likely to produce an average yield if forecast rain eventuates.

In the Wimmera, typically good-to-excellent conditions prevail, and yields of up to 2t/ha can be expected, delivering upwards of 70,000t.

Despite a good start to the season, a dry June and particularly dry July took a toll on pea crops in South Australia, .

Frosts during June and July hindered crop development, which may have been a blessing, as there was not much moisture to produce biomass.

Most SA areas were rated as decile 1 rainfall in July.

August rain was a saviour in many districts, particularly on parts of the Eye and Yorke peninsulas, and in the Mallee.

However, more rain is needed if expected yields are to be realised.

Faba beans are the stellar crop this season.

Area planted is up significantly with an increase of more than 15pc on the 10-year average, and a significant yield increase from rain across the growing areas.

This size of the crop will make marketing a challenge this season as the primary market of Egypt has effectively stopped placing orders due to imposition of faba export restrictions, COVID-19’s impact on out-of-home eating, and substitution with other pulses.

Domestic demand for fabas for feed has also slipped away.

As with field peas, lower prices for Australian fabas may open exports markets for feed if they become a competitively priced feed alternative.

NSW has experienced a 30pc increase in area sown to faba beans, driven partly by higher prices at the time of sowing following short global supply in the previous year.

Northern NSW east of the Newell Highway, including the Liverpool Plains and Bellata through to Croppa Creek, has seen the greatest increase.

On Queensland’s western Downs, faba beans are also looking good, and were planted early to make use of stored moisture.

Victoria’s Wimmera is looking extremely good for faba beans, with over one third of the national crop likely to come from this district.

As with peas, faba beans in the Mallee have benefited from much-needed rain in early August.

In SA’s South East, planting was delayed due to the ground being too wet following decile 9-10 rainfall in April, but crops have since developed very well, and withstood the dry June and July.

In SA’s northern regions and on the Yorke Peninsula, crops planted into February-April moisture have fared well, and are expected stage to comfortably deliver around 2t/ha.

A strong export program has seen the lentil stockpile reduce to the extent the cupboard is nearly bare.

The reduction in the tariff to India from 30pc to 10pc in June has helped clear some of the last remaining lentil stocks to make way for this harvest. 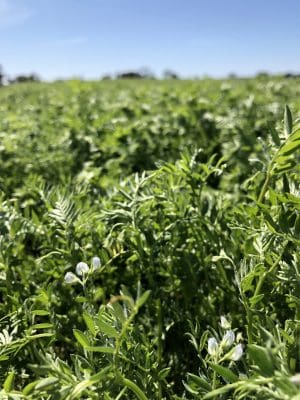 This crop of Bolt lentils in South Australia’s Murray-Mallee is on track for a November harvest. Photo: The Pinnaroo Farmer

The restrictions to India in place at the time of seeding, combined with stocks on hand, affected area sown.

Seasonal conditions are expected to produce an average yield.

The Wimmera will remain the primary producing area, with good conditions being experienced lifting yields above the 10-year average of 1.5t/ha.

Concern over fungal disease is seeing a number of crops receiving aerial application of fungicide.

As with field peas and faba beans, rain in the Mallee has lifted prospects there from very poor to potentially average.

In SA, windy conditions early in the season, and the very dry June and July, held back crop advancement, with rain earlier this month, albeit it a maximum of around 25 millimetres, possibly producing the start of a turnaround.

Given the generally poor season to date, expected yield sits at around 1.5t/ha for this region.

Western Australia is seeing year-on-year increases in area sown to lentils, with the Esperance region benefitting from the southern fronts clipping this region of WA.

Production in NSW is forecast to be exceptional, exceeding the 10-year average by 54pc, again driven mostly by rain in most growing regions.

In Victoria and SA, lupin area is on par with the long-term average, with crops benefitting from rain this month.

The Grain Industry Association of WA has reported the lupin area in WA has been affected by a late start to the season and lower plantings in the Geraldton zone, where 40pc of the usual lupin area has been lost to wheat.

In the Albany region, where 10pc of WA production is grown, lupin crop conditions are described as good to excellent.