LIMITED interest in Australian chickpeas for prompt shipment is being met with an even more limited supply from the dismal 2018 crop which has been hit by severe frost damage in Central Queensland (CQ), and a dry growing season everywhere. 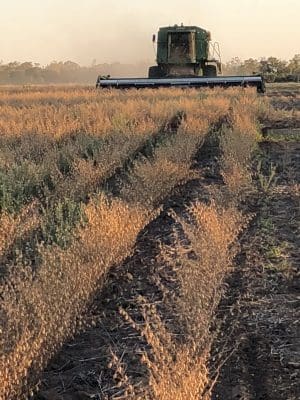 Harvesting a chickpea crop at Condamine on the western Darling Downs, which has grown some of 2018’s best chickpea crops.

India, traditionally Australia’s biggest pulse market, has continued to use tariffs and bans to support its domestic market and Sydney-based GrainTrend director, Sanjiv Dubey, said this is unlikely to change before mid-2019 at the earliest.

“India’s election will take place in the first half of next year, and we don’t expect any change to the bans and tariffs we are seeing on pulses from the Modi Government in the lead-up to it.”

The import restrictions are part of the Indian Government’s move to improve the nation’s self-sufficiency in pulses.

“That is the reason why India’s government agencies are storing peas, and that is depressive for the market.

“It takes India out of the world market, and now Pakistan’s government is dealing with some economic issues like the drop in value of its currency, which has made its imports more expensive.”

Until last month, Pakistan was the biggest buyer of Australian chickpeas in India’s absence.

“We could see another four to six months of that because their economy is being stifled by terms and conditions of the US aid package to Pakistan.”

Bangladesh is a significant secondary market for Australian pulses, but it received its last bulk shipment from Australia in April-May, and is now buying from other origins including Tanzania.

“They may come into the market asking for Jan-Feb 2019 shipments to arrive just before Ramadan.”

Australia produced a record chickpea crop in 2016 of around 2.2 million tonnes, and last year’s crop totalled around half of that.

While recent rain has bolstered yield prospects and delayed harvest for southern Queensland and northern New South Wales, frosts smashed yield outlooks for many CQ crops, most of which have now been harvested.

“If the crop in Australia was 600,000-700,000t, we would have trouble to sell it, but Bangladesh or other markets will come for the small amount that we have at some point.”

Mr Dubey said most of the trade now occurring was based on speculation rather than fundamentals.

“There’s no change in overseas markets when there are no takers for volume sales.”

Despite the lack of export demand, chickpeas have been trading this week in the CQ track market at around $780 per tonne, down from $815/t earlier this month.

This price is still above the long-term average for chickpeas, but below the highs seen in 2016, when two failed monsoons in India boosted its demand and lifted prices to Australian growers to more than $1000 in places.

“We are seeing old-crop being offered from Burren Junction to CQ.”