The QAAFI forecast incorporates data from several disciplines, including the updated Oz-Wheat model, and puts the current winter-crop outlook for Queensland in the 39th percentile ranking relative to all years.

This incorporates current soil-water conditions and the seasonal rainfall outlook based on the Southern Oscillation Index.

The forecast shows most parts of Central Queensland (CQ) and the state’s south have a reduced chance of their 2018 s wheat crop being above their regions’ long-term media, while the state’s other winter-cropping regions are seen as having a 50:50 chance of yields coming in above or below the long-term median expectation.

QAAFI’s report said widespread above-average rainfall is needed across all parts of the state’s cropping region during the next few months to induce further planting opportunities and improve current winter-cropping conditions.

However, the likely range of yield outcomes is still seen as very wide, but will narrow considerably over the next few months as the outlook is updated through the season.

This report said few to no sowing opportunities occurred during April to May across most of the state’s winter-cropping region.

Apart from some parts in southern CQ and northern southeast Queensland, which received average rainfall, below to very much below-average rainfall was recorded from December to late May across most parts of Queensland’s s cropping region.

Rainfall received during May was below to very much below-average for most parts of the state’s cropping regions, which resulted in poor replenishment of soil-water levels. 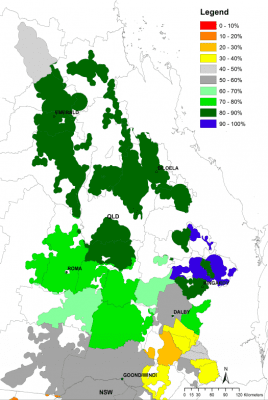 In contrast, most of CQ with its shallower soils has replenishment of soil-moisture levels to above 80pc (Map 2).

The recent pattern of the SOI, “consistently near zero” for the April-May period, indicates a slightly increased chance for above average rainfall in most parts of the state’s southern winter cropping region over the next 3-months (www.longpaddock.qld.gov.au).

This however, will change depending on the movement in the SOI as the season progresses over the next month.

Crops sown into profiles with low soil water are more dependent on in-crop rainfall, and in such situations forecasts based on SOI phases can be most useful.

Although atmospheric indicators of ENSO remains in a neutral phase at this early stage, progress of the climate indicators such as the SOI and sea surface temperature anomalies should be followed closely during the next few months (www.bom.gov.au/climate/enso).

This regional wheat crop outlook is based on the assumption of cropping after summer fallow.

The benchmark for this outlook is the simulated long-term median shire wheat yield within the broad cropping region of Queensland (Map 1). 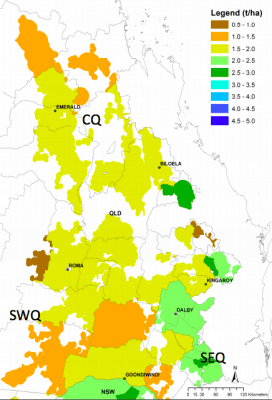 The median yield is based on predicted performance over the past 118-years using an agro-climatic model for wheat with long-term rainfall records.

Map 3 is derived by considering conditions up to the end of May and projecting forward based on rainfall conditions in years from the historical record with SOI phase similar to this year “consistently near zero” in April/May. 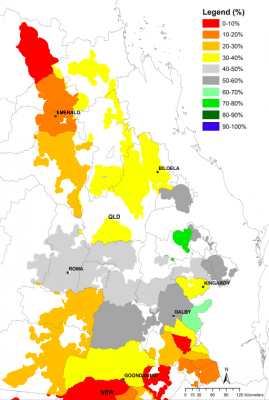 The calculation of benchmark yields and outlook chances do not take into account effects of poor crop nutrition or damage due to pests, diseases, frosts or extreme events.

This outlook is derived assuming only a summer or short fallow period.

The current state wheat outlook, at this early stage in the season, varies across most of the state’s cropping area.

In contrast, most parts of southern and central Queensland have a much reduced chance (less than 20pc) of exceeding the long-term shire yield expectation.

With few to no sowing opportunities eventuated up to now in most of the state’s winter cropping region, widespread above-average rainfall during the next few months is needed to induce plantings and significantly improve the current wheat yield outlook for most of the CQ and southern Queensland winter-cropping region.

At this stage of the season, there is a wide range of likely yield outcomes for the 2018 season as all of the growing season remains in the projected forecast.

The current seasonal climate forecast skill will improve towards the end of July.

Updating of actual climate and thus shortening of the forecast period will cause the range of yield outcomes to narrow towards the final realised yield at the end of the season.

Poor outlook in parts and better possibilities across the state

At present, this early in the growing season, some parts of the southern SEQ and northern CQ are showing increased chances for wheat yield being similar to the worst 10pc of all years.

These values are calculated as broad indicators for shire scale, and do not apply to farm level.

At present, this early in the season, the current state wheat outlook shows a forecast median yield at the end of May of 1.71 t/ha, which is slightly below the long-term median of 1.86 t/ha (Graph A). 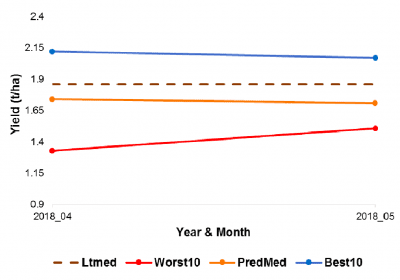 There is however, a 10pc chance that the state yield could be lower than 1.51 t/ha or higher than 2.07 t/ha. However, keep in mind that it is early in the growing season and that widespread above average rainfall during the next 3-months is needed to induce good sowing conditions and improve the outlook at shire and regional scales.

The SOI phase of ”consistently near zero” at end of May indicates a slightly increased chance for above average rainfall in most parts of the state’s cropping region rainfall over the next three months.

There remains, however, quite a wide range of possible outcomes that will depend on conditions in the remainder of the growing season. However, given the increasing skill in forecasts as the season progresses, it is advisable to closely monitor progress of the SOI over the next couple of months.