Quinoa on the cropping menu

HARVEST is underway of the Western Australia Department of Agriculture and Food’s (DAFWA) quinoa trials at Mingenew and Cunderdin as part of a national research project to determine the best growing conditions for the crop. 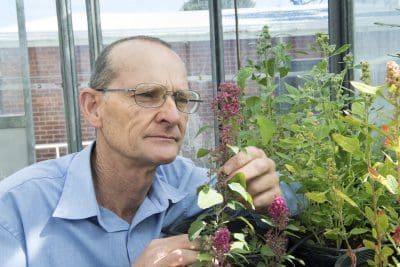 DAFWA research officer, Richard Snowball, is conducting quinoa trials in WA, as part of national research, to assess the best growing conditions for the crop.

The ‘Quinoa as a new crop in Australia – stage 2’ research project, funded by the Rural Industries Research and Development Corporation (RIRDC), began in April 2015.

Trials have been sown in various locations across Australia to better understand where and how quinoa grows best.

DAFWA research officer, Richard Snowball, said in 2016 four trial sites were sown in WA: in April and May at Mingenew; in May at Kununurra; in May and June at Cunderdin; and in early October at Manjimup.

“The wheatbelt trials are testing different planting times, sowing rates and nitrogen applications while the trials at Manjimup and Kununurra are testing a diverse range of seed,” Mr Snowball said.

“Three advanced lines of quinoa developed by the department and RIRDC are included in the trials, as well as ‘Medusa’ the Three Farmers variety, grown in WA.

“Harvested seed will be tested for quality which will include levels of protein, starch, fat and fibre.”

Mr Snowball said initial growing season results from the Mingenew site showed some potential for quinoa planted in late May, with the best plot yielding 400kg/ha.

“However, the use of pre-emergent and post-emergent herbicide for radish control at this site severely affected growth of quinoa,” he said.

“A major challenge of growing quinoa is weed control, particularly when sown in cooler regions where it is less well adapted.

“Department research officer, Harmohinder Dhammu, is currently testing a range of herbicides on quinoa at the Manjimup trial site.”

Mr Snowball said quinoa at the Cunderdin site established well, however frosts in August and September when the quinoa was flowering severely affected seed production.

“Above average winter temperatures at Kununurra this year affected the trial with the best yields of 1.2 tonnes per hectare.  In 2015 quinoa yielded up to 2t/ha in trials.”

Mr Snowball said results of the 2015 trials at Kununurra and Bool Lagoon in South Australia would be published as part of the proceedings of the International Quinoa Conference held this week in Dubai.