Rain in WA: handy for some, too late for others

IT’s a tale of mixed fortunes for winter crops in Western Australia where rain this week across the state’s farming belt has been too late for some, useful for many and too much for others. 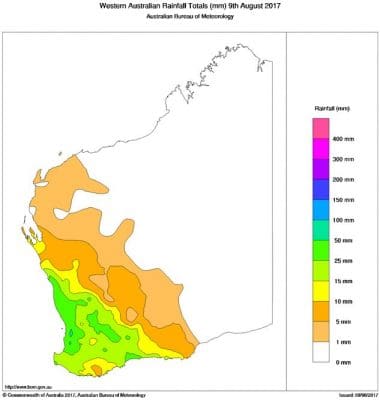 Falls of 10 to 50mm of rain were recorded across the WA farming belt on Wednesday. (Source: Bureau of Meteorology) (Click on map to enlarge)

The mid-week rain band brought falls of 10 to 30 millimetres, with some up to 50mm, to the parched northern cropping areas. But for many crops there it was too little, too late.

It was a different story in the south where similar rainfall registrations gave crops that had already been travelling well a boost along. But in some cases it created waterlogging issues in those areas wet from earlier rains.

Planfarm project consultant at Geraldton in the north, Peter Newman, said while the rain would be useful for some crops, there were many that would be too far gone for it to be of any benefit.

“It all makes a difference, but it is just that some crops that went in only had about 20 millimetres over four months. They are small and spindly, in some cases wheat with a single tiller with a head on it. Rain is unlikely to turn them into a good crop,” he said.

“But there are lots of other crops that weren’t as dire as that, so this rain will make a massive difference.”

Mr Newman said it had been a promising lead up to the winter cropping season with a wet summer that saw a lot of growers receive 200mm of summer rain. 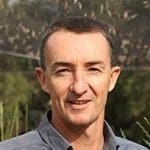 “So, there was stored moisture. For most people, the whole crop went in. Then we had 10-15mm on May 10 and we all patted ourselves on the back and thought we were off to a good start. But it didn’t really rain properly again until the end of July,” he said.

“So, it was too dry for the critical period of the season. Some people had 20mm for April/May/June/July which is not enough.”

GrainGrowers regional co-ordinator for WA, Alan Meldrum, said on a recent trip from Dalwallinu to Mullewa east of Geraldton in the north it was apparent the rain had come too late for most crops, but at least it had lifted the spirits of growers.

“If you’ve heard the reports about how bad it is, they are very true. It’s August and far too late for them. There is no chance of a decent harvest,” he said.

“But what it has done is that a lot of growers will now be able to get seed for next year. Before this, a lot of them wouldn’t have even got their header out of the shed, but now a lot of people will be able to get their own seed.

“The mood is better because the landscape will go green for at least a month now rather than being fairly brown.”

In comparison, Consult Ag agronomist at Narrogin south-east of Perth, Garren Knell, said crops in the central/southern area were “tracking okay” and the recent rains meant many growers in the southern half of the farming belt were “breathing a sigh of relief”. 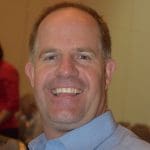 “The crops are patchy and a bit late, but anything below the Great Eastern Highway now has a full profile of moisture,” he said.

In fact, Mr Knell said in some areas, including around the Narrogin district, conditions were now too wet.

“We are wet. One of my clients has had almost 250 millimetres of rain in the last five weeks,” he said.

“There is more rain forecast on the weekend, and in my area we are already struggling with waterlogging and can’t spray paddocks.”

Mr Knell said there had been an increase in canola plantings in the area this season, but he didn’t expect production to be any higher than last year because many of the crops were patchy and thinner.

He said there had been a big drop in oat plantings this year.

“We had record high prices for oats the year before and a big increase in production which created record low prices at the end of last year. So, there has been a big drop in production, purely on price projections,” he said.

Consult Ag agronomist at Northam, Geoff Fosbery, said the rain had helped crops across the central and northern wheatbelt region.

“It will improve yield on the better crops and, where the crops have come up late, it will ensure the ground will at least be covered and reduce the risk of erosion in summer on the poor areas. So, it is a plus,” he said.

Mr Fosbery said more rain fronts were forecast to move across WA on the weekend and into next week which would also be useful.

However, he warned the next issue for growers to be aware of was the potential for late crops to suffer heat shock. 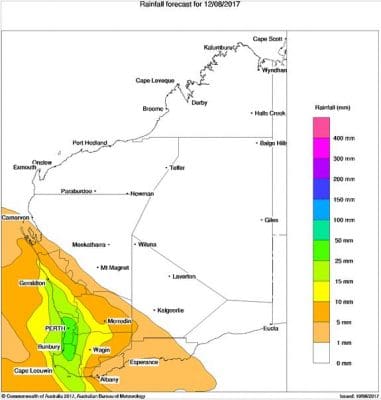 More rain is forecast for WA, with this map showing the likely falls this Saturday. (Source: Bureau of Meteorology) (Click on map to enlarge)

“If we get the rain they are predicting, as you go north water won’t be the biggest hassle, it will be the potential for heat shock on the very late crops that are still early tillering,” he said.

“Because the crops are so young they are not using much water at the moment. We have had quite a bit of water in the past three weeks, but it will be when we hit 32 to 35 degrees at the early next month as they are starting to run up, that’s when it will hurt. Water is important, but heat shock will be the next thing.”

In the far south, the Albany zone has above average potential and the Esperance zone remains in excellent condition throughout.