THE Walgett district is this year expected to produce more than one million tonnes of wheat alone in a welcome turnaround from three preceding seasons where little or no winter crop was harvested.

The buoyant mood of Walgett wheat farmers reflects the national outlook which is seeing estimates for Australia’s 2016 wheat crop rise as the harvest picture develops. 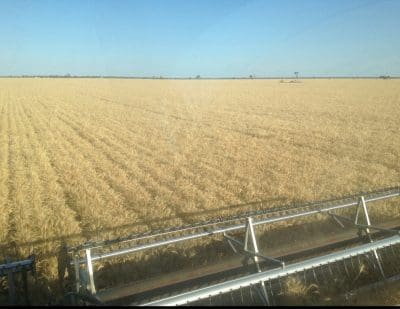 The Australian Bureau of Agricultural and Resources Economics and Sciences (ABARES) standing forecast, released in mid-September, estimated the wheat crop now being harvested at 28.1 million tonnes.

In line with this is the just-revised Lachstock Consulting estimate of 28.3 million tonnes.

However, some trade sources predict the crop will get to 30 million tonnes as better-than-expected yields make their way into header boxes and offset frost losses in Western Australia and waterlogging damage in NSW.

Walgett agronomist Greg Rummery said wheat yields were the highest he had seen in his 28 years in the district.

“Lots of crops are getting five to six tonnes to the hectare, and the odd one is giving seven a shake. It’s the biggest wheat harvest I’ve ever seen — well over a million tonnes,” Mr Rummery said.

Rain interrupted planting of the crop, which started in late May/early June and finished early in July.

Mr Rummery said average yields from the late sown-crop have come in at around 3.5-4t/ha, still well ahead of the long-term average of 2.5 tonnes.

While many deliveries were making Prime Hard, screenings have pushed some crops into AUH2 or HPS1.

“Prices for those grades are $50 to $60 a tonne behind Prime Hard, so growers are choosing to hang on to that in the hope that storing or grading it will increase its value.”

Come by Chance farmer Ben Hawke, Merridale, is around one-quarter of the way through his wheat harvest, and has described his yields as “unbelievable” following no harvest in 2013 and 2014, and a dismal result last year.

For the free daily email click on the following link: Get our free daily cropping news straight to your inbox – Click here

Heavier crops are on track to average 4.5-5 tonnes per hectare, and some of his Spitfire wheat has yielded 5.2t/ha.

Mr Hawke expects his rain-interrupted wheat planting over 1,200 hectares to average 4t/ha, well up on the long-term average.

“To have even these crops that were waterlogged going 2.8 tonnes is way better than I expected.”

Quality has also been a pleasant surprise, with early-planted wheat making H2 and crops planted in mid-June and early July making Prime Hard.

Mr Hawke said the harvest of 2016 will be one to remember.

“For the entire district, it would have been the last person out of Walgett, turn the lights off if the planting rain didn’t arrive in the nick of time. This was really lastminute.com stuff.”

“The average for Spitfire has been 4.5t/ha, with patches over five,” Mr Moore said.

“The first wheat I harvested this year yielded 800 tonnes off 170ha; that compares with last year, when I got 120 tonnes off 200ha, and the two years before that when I didn’t sow anything.”

Mr Moore said some of his wheat has made Prime Hard, some has graded APW, and the bulk of it has been APH2.

Walgett growers have started on chickpeas this week, and Mr Moore said his first yields have averaged around 2.1 t/ha, with others reporting yields of 2.5t.

Mr Moore said his chickpea crop was “25mm away from disaster”.

“Late in the season, 30mm of rain was forecast, which would have held spraying up for a couple of weeks; we ended up getting 7mm.”

“Across the board, everyone’s getting good yields for everything.”

Mr Rummery has estimated harvest in the Walgett district to be close to the halfway mark.

“It’s been an unusual but an unbelievable year; it was bone dry until late May, then we had a tremendous September and a long, mild finish which enabled the crop to bounce back.”