SCIENTISTS have for the first time discovered insecticide resistance in redlegged earth mite (RLEM) in the southern cropping region. 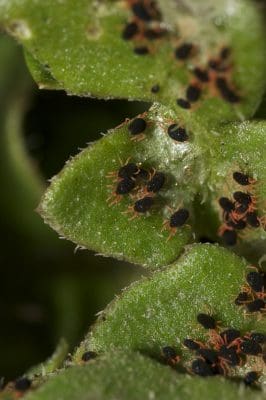 Redlegged earth mite is a threat to a variety of Australian crops and pastures, with canola, lupins and legume seedlings the most susceptible to attack. (Photo: Andrew Weeks)

Recent laboratory studies on several RLEM populations in South Australia have confirmed resistance to both synthetic pyrethroids, including bifenthrin and alpha-cypermethrin, and organophosphates, including omethoate and chlorpyrifos.

This is the first time resistance has been detected in Australian RLEM populations outside of Western Australia, where resistance can be found throughout that State’s grain belt.

Research suggests that whilst it is too early to determine just how widespread the distribution of resistance is in the south, resistant samples have come from more than one paddock.

Cesar and University of Melbourne entomologist, Paul Umina, said further sampling would be undertaken this year to enable more detailed mapping of the extent of resistance in the southern and northern farming regions.

RLEM is a threat to the profitability of a range of Australian crops and pastures, with canola, lupins and legume seedlings the most susceptible to attack.

Mite feeding can lead to distortion or shrivelling of leaves and affected seedlings may die at emergence when mite populations are high.

RLEM are most active from autumn to late spring.

Dr Umina said the discovery of resistance in samples collected from SA in 2016 meant growers and advisers would need to reconsider their RLEM strategies, requiring a focus on ensuring insecticide applications were used judiciously against the pest as part of an integrated approach to control.

“As an industry, we must do everything we can to prevent further resistance development,” Dr Umina said.

To guide growers and their advisers in their efforts to control RLEM and reduce the risk of resistance occurring, a Resistance Management Strategy (RMS) for South Australia, Tasmania, Victoria and southern NSW has been developed, in addition to a separate strategy for WA.

‘The RMS for the Redlegged Earth Mites in Australian Grains and Pastures’, developed through the National Insecticide Resistance Management (NIRM) working group and endorsed by CropLife Australia, has been published by the GRDC and is available for viewing and downloading at https://grdc.com.au/FS-RLEM-Resistance-strategy-South or at http://ipmguidelinesforgrains.com.au.

The strategy’s key recommendations include not using the same chemical groups across successive spray windows (on multiple generations of mites) and reserving co-formulations (or chemical mixtures) for situations where damaging levels of pests are present and a single active ingredient is unlikely to provide adequate control.

“The most important message is this: only use chemicals when needed, and if they are required, rotate between different groups of chemicals,” Dr Umina said.

Other recommendations in the RMS, as part of an overall integrated pest management (IPM) approach include:

Growers are again this year being encouraged to use a RLEM insecticide resistance testing service, available at no extra cost to growers through a national GRDC-funded project led by the University of Melbourne, in collaboration with cesar, the Department of Agriculture and Food Western Australia and CSIRO.

Cesar researcher, James Maino, said growers should pay close attention to RLEM populations sprayed with insecticide so that any potential resistance could be detected early before developing into a more serious issue.

“If growers notice poor efficacy from spraying or experience chemical control failures over autumn and winter, we want to know about it,” Dr Maino said.

Growers and advisers suspecting chemical resistance in RLEM should contact Dr Maino on 03 9349 4723. Samples will then be collected from the property and follow-up advice as to the status of resistance will be provided.

“In addition, localised resistance to organophosphates (OPs), including omethoate and chlorpyrifos, has been discovered on multiple WA properties,” Ms Micic said.

Dr Umina said growers needed to understand how to minimise the development of resistance and encouraged them to adopt the recommendations of the Resistance Management Strategy which would help guide their selection of control options. 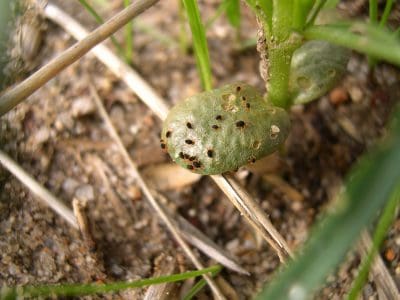 RLEM feeding can lead to distortion or shrivelling of plant leaves and affected seedlings may die where there are high populations present.

He said the rotation of different chemical groups was central to the strategy and would minimise the selection pressure for resistance to the same insecticide group across consecutive generations of RLEM.

“Do not use the same chemical group across successive spray windows (on multiple generations of RLEM) as this will select for resistance to that chemical group,” Dr Umina said.

“In addition, it is recommended that co-formulations or chemical mixtures are best reserved for situations where damaging levels of RLEM and other pest species are present, and a single active ingredient is unlikely to provide adequate control.”

Dr Umina said growers should at all costs avoid the practice of ‘insurance’ sprays and advised that using the broadest range of integrated pest management (IPM) strategies was the best way to avoid future spray failures and prevent or delay the development of insecticide resistance.

WA growers who find RLEM that survive registered rates of insecticide treatments next year can arrange for resistance testing to be conducted by contacting Ms Micic on [email protected], 08 9892 8591 or 0427 772 051.

The Resistance Management Strategy for the Redlegged Earth Mite in Australian grains and pastures – western region – is available as a GRDC Fact Sheet at http://grdc.com.au/FS-RLEM-Resistance-strategy-West.