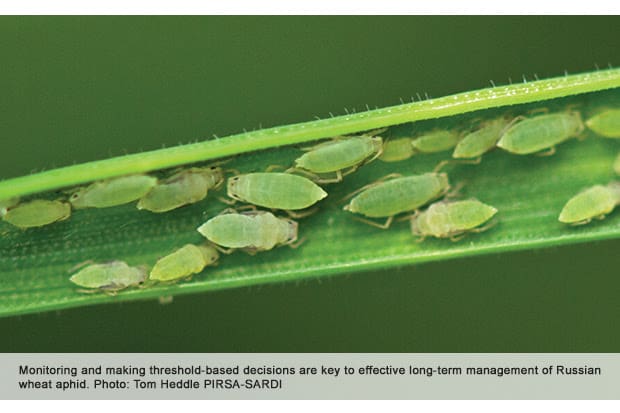 THE more Australian researchers learn about Russian wheat aphid (RWA), the more confident they are that the pest does not pose a major threat to winter cereal crops in this country if growers and advisers understand how to manage it effectively.

This is the message from Grains Research and Development Corporation (GRDC) pests manager Leigh Nelson, following the recent detection of RWA spreading to wheat crops north of Esperance in Western Australia.

It is the first time the pest has been detected in WA, after being discovered in South Australia in 2016 and subsequently in Victoria, parts of New South Wales and Tasmania.

According to the WA Department of Primary Industries and Regional Development (DPIRD), which is conducting further surveillance, eradication in WA is unlikely due to the biology of the pest and its ability to spread via the wind and multiple other grass hosts.

Dr Nelson said scientists had been studying RWA under southern Australian conditions and within local farming systems since it was first detected in 2016.

“Through research investments by the GRDC, a biological and ecological profile of the pest is being built to provide Australian grain growers with scientifically robust management tactics for the future,” she said.

SARDI entomologist Maarten van Helden said treatment of RWA should only be considered if infestations are at potentially damaging levels.

Dr van Helden, who has helped to lead GRDC-invested RWA thresholds-related research, said thresholds based on Australian conditions would be available soon and show that RWA had less impact than reported in overseas conditions.

Dr van Helden said symptoms of RWA – including striping and rolling of leaves, and sometimes purple discoloration – were always the first sign of presence of RWA and might stay visible even after aphids had disappeared.

“It is important to check for symptoms and suspicious plants need to be checked for the presence of the tiny green aphids inside the youngest leaves,” he said.

GRDC-invested research is also investigating how RWA survives over summer. This knowledge is considered pivotal in determining the risk of infestation for winter sown cereals and potential damage ahead of each new cropping season, as well as aiding RWA management planning and development of cultural controls.

Chemical permits are available to control RWA in grain crops, with more information available from the Australian Pesticides and Veterinary Medicines Authority’s website.

Look for RWA plant damage symptoms on barley and wheat, including white and purple longitudinal streaks on leaves, and curled, rolled or hollow tube leaves.

WA growers and agronomists are encouraged to report aphids and suspected RWA damage to DPIRD’s Pest and Disease Information Service on 08 9368 3080, [email protected] or the MyPestGuideTM Reporter app.

A RWA resource portal which includes updates on current research efforts and the latest RWA management advice, hosted by cesar, is available at http://bit.ly/2Px67tu. The GRDC also has RWA information on its website at https://bit.ly/31cAxKp.

Recent research is discussed in a GRDC podcast, ‘Just how many Russian wheat aphids is too many’ , and another GRDC video, ‘RWA green bridge surveillance’ .