Wheat germplasm is being sourced from around the world by Western Australian scientists for a new pre-breeding research project to develop new varieties that germinate and establish in very low soil moisture. 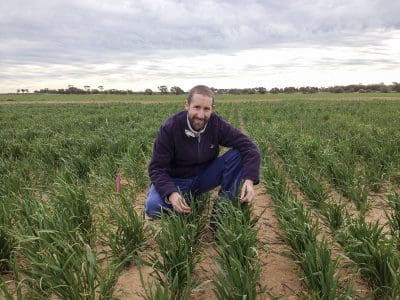 The research by the Department of Agriculture and Food (DAFWA) will use conventional genetic technology to identify the genetic markers responsible for robust early plant emergence and high grain fill rates under variable soil water conditions.

DAFWA senior research officer Michael Francki said the research aimed to improve the performance of new varieties at both ends of the growing season.

“This work aims to improve crop establishment and resilience during grain filling by identifying the number of genes and the genetic control of traits that respond to varying soil moisture at the beginning and the end of the growing season.

“While there has been very little work previously done in this area, we expect to find that multiple genes are responsible for traits associated with early emergence and the rate of grain fill.

“Once identified, these genes can be used to create and deliver the tools necessary for  commercial breeders to develop new and better adapted varieties.”

The work is a part of the department’s $20 million Boosting Grains Research and Development project Flagship initiative, made possible by the State Government’s Royalties for Regions program.

Dr Francki and his team had acquired a range of germplasm from existing commercial wheat varieties to developmental lines, which will be tested in glasshouse and field trials.

“We have sourced a range of germplasm from arid environments in the Middle East, the sub-continent, North Africa and South West Asia to benchmark against more than 60 Australian wheat varieties from Western Australia and the Eastern States,” he said.

“The research team will compare the rates of emergence and grain fill in soils with low and optimal soil moisture in the search for new genetic diversity.”

The field trials at the department’s Merredin Research Facility and other locations in the grainbelt will help to validate the glasshouse trials.

It typically takes between seven to 10 years for the commercial sector to develop new wheat varieties.