Research to speed up battle against wheat rust

WITH a 70 per cent increase in global agriculture productivity needed to feed nine billion people by 2050, defending against wheat yellow rust – or stripe rust as it is known in Australia – requires immediate action to secure global food supplies.

Towards that end, group leader at the Earlham Institute (EI) and The Sainsbury Laboratory (TSL) in the United Kingdom, Dr Ksenia Krasileva, has been awarded a New Investigator award from the Biotechnology and Biological Sciences Research Council (BBSRC) to find and breed plants that can better fend off this disease, and potentially reduce the use of pesticides. 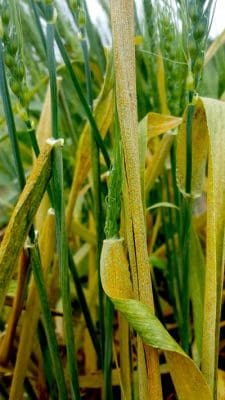 Harnessing the latest, most up-to-date wheat genome produced at EI and other national and international wheat genomics tools, Dr Krasileva will be leading the research project to vastly reduce the time taken to identify disease resistance to wheat yellow rust, from 15 – 20 years down to only two to three.

Occupying nearly 25pc of world agricultural land, wheat is the most prevailing cultivated plant worldwide. With annual production at more than 650 million tons globally, the key crop provides a quarter of all calories and a fifth of protein supply to humanity, and yet the annual yield increases are critically below the rate required to feed our growing population.

Wheat rust can cause devastating crop losses, which means that currently fungicides are used in an attempt to control the disease, which is costly both for farmers and for the environment.

By applying the latest DNA sequencing technologies to wheat breeding, it is possible to produce plants with much better natural defences faster, therefore, reducing an over-reliance on harmful chemical sprays. This will also help farmers in the developing world, who often cannot afford to protect their crops and can suffer huge losses.

“Wheat, like humans, has an advanced immune system. Funding from the New Investigator Award will help to harness this aspect of wheat to improve the health of the plants and our planet. Growing wheat varieties resistant to diseases is an economical and environmentally friendly solution to increase yield on available agricultural land while reducing production costs,” Dr Krasileva said.

Through EI identifying new resistance traits by studying a variety of wheat plants and the diseases that affect them, breeders will be better informed to introduce defences in the most widely grown varieties around the world.

“Knowing the genomic locations of new disease resistance is key to accelerating this process. The gene isolation approach developed here will be applicable to any genetic trait of interest.”

Overall, this research will help to minimise both losses of a crop that is of vital importance in feeding a growing population, as well as the negative environmental impacts of intensive pesticide use.

The BBSRC New Investigator Scheme aims to assist early-career researchers in obtaining their first major element of research funding. As well as funding the main bulk of the research into wheat disease resistance, this grant will allow for the cross-disciplinary training of the postdoctoral scientists who carry out the work, and enhanced research capacity for industry and non-profit organisations.