Researchers bring sorghum gene genie out of the box QUEENSLAND scientists have developed the world’s first pan-genome for sorghum in a breakthrough for crop improvement and gene discovery.

“This is exciting news for Queensland where sorghum is a staple crop used mostly in the intensive livestock sector and worth more than $250 million this year,” Mr Furner said.

“A pan-genome describes all genetic variation within a species and this enables researchers to find previously missing genetic information.”

“A team of scientists led by Dr Emma Mace identified novel genes from wild relatives of cultivated sorghum that could help to increase crop adaptation to environmental and disease stresses. 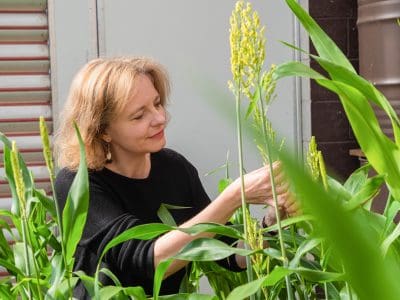 “Other genes were also identified for productivity and nutritional traits such as grain colour, grain weight and seed dormancy.

“Until now our knowledge of the sorghum genome has lagged behind other major crops. Armed with the pan-genome data, researchers can now tap into variation at specific genes to breed improved sorghum varieties.”

The Queensland Department of Agriculture and Fisheries, Queensland Alliance for Agriculture and Food Innovation at the University of Queensland, the Chinese Academy of Sciences and BGI Genomics jointly announced their discovery in the prestigious journal Nature Plants.

The Global Diversity Trust and the Australian Research Council co-funded the project which aimed to improve productivity in sorghum.

Source: Queensland Department of Agriculture and Fisheries, University of Queensland