RETIREMENT beckons for prominent Australian agriculturalist, Professor Stephen Powles, who, from humble beginnings, forged a career in agricultural weed management that has seen him rise to become a global expert in herbicide resistance. Not a bad achievement for a boy from a dairy farm on the NSW North Coast who left school at 15 and found his own way in the world through a combination of hard work and determination.

Professor Powles will step down at the end of June as director of the Australian Herbicide Resistance Initiative (AHRI) at the University of Western Australia, ending a tenure that has seen him become a leading authority on herbicide resistance in weed populations on farms across Australia and throughout the world.

Despite the risk of critical herbicides succumbing to the ever-increasing incidence of weed resistance and no longer being available to agriculture, Professor Powles said those involved in farming still had the time and capacity to head off the threat if they applied sound, resistance-management techniques.

“Whether we still have herbicides in years to come is still in our own hands. With some herbicides, plants easily develop resistance, but with others like glyphosate it is very hard for them to evolve resistance. Therefore, you can protect them,” he said.

Too much of a good thing

Professor Powles said the key to maintaining the longterm effectiveness of herbicides was not to rely on them all the time.

“When on a good thing don’t stick to it. That’s the best thing I have ever said. Look to see what you can do with other things, use other herbicides, use mixtures, use Weedit-type sprayers because you want to be able to preserve glyphosate,” he said.

He conceded it also meant that no-till farmers might have to consider using an occasional tillage to deal with a weed and resistance problem.

“When on a good thing don’t stick to it. That’s the best thing I have ever said.”

“Strategic tillage is a sensible thing to be doing. One of the projects now that Michael Walsh (formerly with AHRI and now director of weed research at the University of Sydney) is leading is, instead of using a Weedit spray, using a mechanical tyne where the sensor sees the weed in the fallow. Fallows in many areas are so reliant on glyphosate, so if we could just rip individual plants out with tynes that represents diversity,” he said.

Professor Powles said in the future there would also be a place for farming robots in weed resistance management.

“Do I see a role for robotics? Yes of course. But you wouldn’t want to hold your breath for robots to be working on your farm,” he said.

“In the interim, we need to control a problem with the chemicals that remain for some years to come. That’s not to say that robotics won’t have an impact, but I do think the time frame under which they are reported to be available is overstated. We will not have cost-effective, cheap robots identifying and autonomously removing weeds in crops at realistic prices in the short term. I hope I’m proved to be wrong, but that is my view.”

Professor Powles said he had great faith in the ability of Australian farmers to deal with herbicide resistance because they led the world in the resistance-management strategies they were using. Professor Powles (centre): “Our farmers are as good as any farmers in the world”

“Farming in Australia is difficult, cropping its difficult, there are low profit margins, no subsidies. As a result, we have selected for very good farmers. Our farmers are as good as any farmers in the world,” he said.

“We are certainly better than anyone in the world at farming without much water. We can manage problems, and resistance is just one of the problems. We can very successfully manage it. It is by using a combination of herbicides and diversity. The more diversity you have the better off you are.”

“Some of that diversity in the northern summer cropping areas has been removed by an over reliance on glyphosate. Surprise, surprise, there is now more resistance. But it is an entirely manageable problem,” he said.

Professor Powles said in Western Australia, which arguably had had the worst herbicide resistance in Australia, farmers were leading the way with their adoption of effective weed management techniques.

“In Western Australia where farmers are now successfully managing resistance and their weed problems, the key for many has been harvest weed seed control and getting those weed seed banks to really low levels,” he said.

“So, they don’t have many wild radish and rye grass plants, whereas in some other parts of the country seed banks are still too high.

Resistance rife in US

Professor Powles said while Australia was the first country to have big problems with herbicide resistance in the 1990s, it was in the United States where it had now become a huge issue.

“I was predicting that in the US and it has come to pass. American farmers and those who advise them need to learn the lessons that Australian farmers have learnt. Some of the problems we have had are playing out in other countries.”

After leaving school at 15 and working for a short period in the New South Wales public service “as an extraneous clerk”, and then for a stock feed firm, Professor Powles gained enrolment at the Tocal Agricultural College at Paterson in the NSW Hunter Valley in 1971 as a 21-year-old where he went on to become dux of his year.

He then won a Commonwealth advanced education scholarship to go to Hawkesbury Agricultural College on the western outskirts of Sydney where he became the top student in plant sciences. 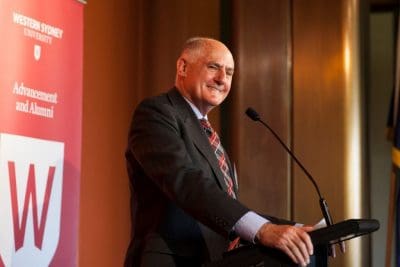 At the age of 24, he was accepted into the masters of crop science program at Michigan State University in the United States before returning to Australia to do a PhD at the Australian National University in Canberra.

His education path then saw him receive a CSIRO overseas postdoctoral fellowship that took him to Stanford University in California, then on to Paris for a year and a half.

“When I was in California and in France I had seen the very first populations of weeds that were evolving resistance to herbicides. At that time it was atrazine resistance in maize. I thought: we use a lot of herbicides in Australia but there has been no mention of herbicide resistance. So, I started looking into it and decided it was an area I’d work on,” he said.

On returning to Australia in 1980, he received a one-year grant from the Reserve Bank “to go anywhere in Australia to do whatever I wanted”. He decided to join the Waite Agricultural Research Institute at the University of Adelaide in South Australia to look into herbicide resistance.

“Just as I got back to Australia the first case of resistance became evident at Bordertown in South Australia. That was ryegrass resistance to Hoegrass. Then I became aware of a lucerne paddock at Ararat (in Victoria) where paraquat resistance appeared in 1981,” he said.

With a grant from the predecessor to the GRDC, the Wheat Research Council, he started documenting resistance in the barley grass population in Victoria which led to him being given a lectureship at the Waite Agricultural Institute.

“Resistance exploded in Australia and I was lucky enough to be the right guy in the right place at the right time and could build a big team focused on resistance issues back when we knew nothing about it and people didn’t believe plants could evolve resistance to herbicides,” he said.

In 1997, Professor Powles said the GRDC had identified there was a big problem with herbicide resistance evolving in Western Australia.

“They wanted a new initiative and asked me to head it. So, 20 years ago I moved my family from Adelaide to Perth and started the Australian Herbicide Resistance Initiative (AHRI) based at the University of Western Australia (UWA),” he said.

No good at golf

When Professor Powles retires from his role as AHRI director at the end of June he will remain as a half-time professor at UWA and devote time to his position on the GRDC Board and other professional activities.

“I’m no good at golf, so I am going to keep doing many of the things I enjoy,” he said.

His replacement at AHRI will be Hugh Beckie, a Canadian farmer and researcher with Canada Agriculture from Saskatoon, Saskatchewan.