Sunrice AGS grower services and agronomic development general manager, Tom Howard, said growers were about 85 per cent of the way through the harvest.

“It has gone well. It has been dry, unfortunately from one perspective, but for harvest it has allowed the crop to come off well,” he said.

“On the whole, yields are very good. We originally forecasted a crop of 600,000 tonnes but we are hopeful we will move through that as yields on the whole look as though they will be at least, if not better than, the five-year average of 10.4 tonnes/hectare.

“At this stage it looks as though yields will be in excess of five-year averages.”

Mr Howard said growers had been happy with how the crop had performed and how it had come in this season. 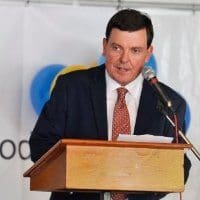 “There was plenty of water this year, but we are looking for a wet winter because the outlook is for an average to slightly drier time,” he said.

“We have an eye on where we think water will land next year, and have recently come out with a new set of fixed price contracts for next year which have received good interest from growers.”

Mr Howard said prices had been quite strong and there had been some exceptional results from both long season crops and new, short season varieties which had performed very well this year.

There had also been some rice farming systems with double cropping which had strengthened whole farm returns.

“We came out with a fixed price contract for C19 next year for Reiziq at $400/tonne. Even this year we have seen growers’ returns, with the way pricing and yields have been, being very pleasing,” he said.

Mr Howard said the ongoing dry weather would see harvest wrapped up in the next few weeks.

“It always tends to have a little bit of a tail, but the forecast for the next week is for it to be dry and warm with temperatures in the early 30s, so with the continuation of the warm weather we expect that by the end of the month harvest will be significantly finalised,” he said.

“Some will extend into May, but we expect the vast majority to be finished by the end of April.”