LOW water availability and high water prices have seen just 54,000 paddy tonnes of rice harvested in the Riverina this season, a fraction of the 2018 crop of 623,000 tonnes and the second lowest recorded since the start of the Millennium Drought in 2003.

With the 2019 harvest now completed, SunRice general manager global agribusiness and sustainability Tom Howard said despite water-related challenges and seasonal conditions fluctuating from extreme heat to the occasional cold snap, Riverina growers had once again shown their resilience and expertise. 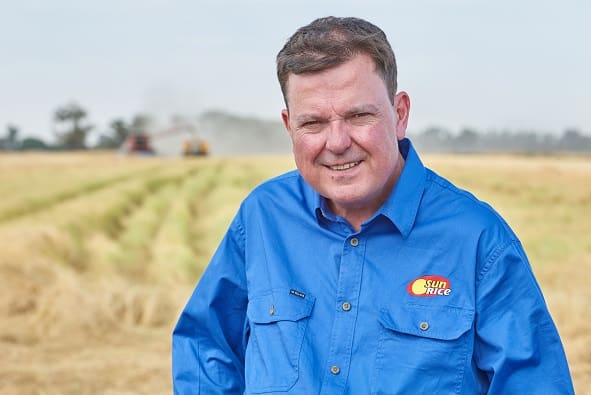 “Both these crops were drill sown, a technique that is growing in popularity and was used across 70pc of the area grown to rice this year. A combination of improved irrigation layouts, machinery technology and available weed control options ensured drill sowing has delivered top yields with decreased water use. Growers reported between one to two megalitres per hectare less water use compared to crops grown using other methods.”

Once again, this season there were a number of exceptional results achieved on a gross return per megalitre and hectare, as outlined in the table below, including these highlights: While the majority of the 2019 crop was planted to Reiziq (73pc of the area), other varieties grown included: The SunRice Board has announced that the lower end of the price range in the C18 Pool for base grade medium grain (Reiziq) has been increased by $15/t for the 2018 crop (for rice harvested in 2018 and marketed in the financial year just ended on 30 April 2019).

SunRice chairman Laurie Arthur said the adjustment was approved by the Board based on the strong finish to the financial year that SunRice had experienced and the ongoing strategy to deliver premium prices for Riverina rice in key domestic and international markets.

“With prospects improving for winter cropping following the recent rain across the Riverina and in the catchment, we hope this price uplift provides growers with a timely cashflow injection. We also hope the seasonal outlook continues to improve as we head into C20,” he said.

“We remain hopeful that, as we close out the year, a further price uplift for C18 could be delivered, dependent on final audited results and year-end adjustments.”