DRIVERLESS farming robots with the ‘smarts’ to not only identify different weeds but then either spray or chip them out are nearing a commercial reality. 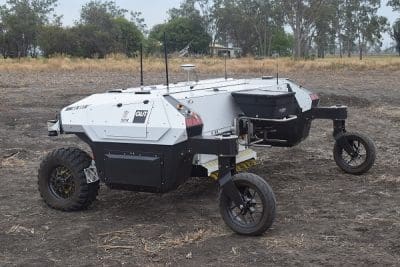 The AgBot farming robot opens up a new world of integrated weed management options for farmers.

The Queensland University of Technology (QUT) is close to releasing its light-weight autonomous AgBot II machines that have such intuitive capabilities they could be the answer to dealing with the growing threat of weeds developing herbicide-resistance on Australia’s cropping farms.

Each machine has a sophisticated, integrated weeding system that uses cameras and lighting to detect and classify different weed species, and then removes them either mechanically or by spraying.

QUT research engineer, Owen Bawden, said the integrated system allowed operators to program the machine to apply different eradication techniques to different types of plants at the same time in the one pass. 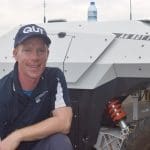 “We train it in the field. If we are working, say, in a cotton field, it will look out for cotton plants, but will actuate on anything outside of that such as fleabane or sowthistle. We might decide that chemicals are no longer a great option for removing sowthistle, so we might mechanically hit those and decide to spray the other types of weeds.”

The ‘seeing eye’ of the machine is a colour camera that detects plants and identifies the different plant species based on their colour, texture and leaf shape.

On a recent six-week field trial looking at particular weed species in south-east Queensland, the machine had 98 per cent accuracy classifying the weeds. 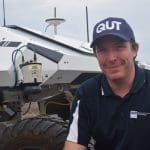 QUT research fellow, Chris McCool, said such a capability allowed for plant specific treatments to be applied across a paddock.

“The vision system gives it the intelligence to not only detect weeds but also classify the different species of weeds. That allows an integrated weed management approach where you deal with the different weeds in a different manner,” he said.

“The same camera technology can also be used to inspect the crop and determine how much the crop has grown over time and where there are problem areas.”

Mr Bawden said the AgBot’s special mechanical weeding system featured a gang of small, hoe-like implements that were individually triggered to dig out weeds that the machine detected as it passed over them. 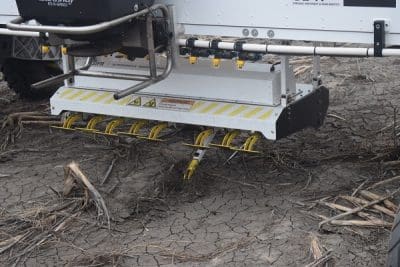 The mechanical weeding system features a gang of hoe-like implements that extend individually to rake out weeds as the machine passes over them.

“It is like a piano. It is an array of implements. The idea is that we can actuate across the whole width at any point at any time. If we had had only one implement that moved itself back and forth, we couldn’t do as many actuations,” he said.

“It allows us to do a lot more weeding as the robot is moving. The robot continuously drives and, as it puts an implement down into the ground, it uses the momentum to drag it through the soil and remove the weed.”

Mr Bawden said a key advantage of the robots over conventional farming machinery was that they operated at very slow speeds.

“It operates around 3-5 kilometres/hour which is really good for doing accurate weeding. Being able to operate 24 hours a day means speed isn’t really a concern. The slow speeds also give a lot of advantages in the design and engineering of the vehicle,” he said. 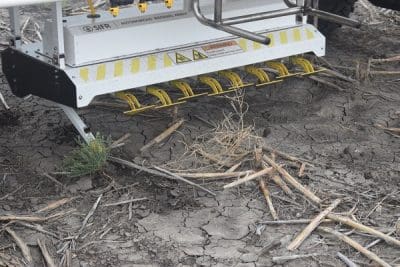 Once the robots are commercially released to farmers, Mr Bawden envisaged they would work in fleets of two to 10 units, depending on the size of the farming operation.

“A farmer who buys the system would map their farm and geo-locate all the boundaries of the fields,” he said.

“If they, say, wanted two robots to be operating in a fallow paddock they could task two robots to do, say, mechanical weeding on anything that looks like a weed. The robots would then be smart enough to co-ordinate their coverage of the paddock. They could do half each.

“The farmer would have a supervisory role, not an operator role. We envisage that initially they would have to supervise the operation in close proximity, but eventually they would be able to operate their whole farm remotely. The interface system would mean the farmer gets a notification to the phone, tablet or office computer.

“In the future, it might be a large contracting company that operates the robots in an area. They might have a central base station that knows where the 100 robots they have are.” 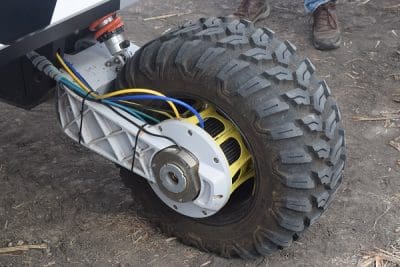 The wheels are driven by electric drives.

Each AgBot is an autonomous, wheeled vehicle that has two electric drive motors, four wheels and differential steering.

The electric drive system also powers all the electronics on board.

It uses an RTK GPS system for navigation and has an electronic safety system on board so it can be e-stopped remotely by an operator.

It also has a laser scanning system for obstacle detection that picks up obstacles within about 50 metres, but the robot won’t stop until it is within about a metre.

The unit weighs 600 kilograms and is set on three-metre wheel centre widths in line with controlled traffic farming.

It is 2.3m long so it can be packed into a container and be put on a flat-bed trailer for transport.

The vehicle has lithium iron phosphate batteries that enable it to run for about 10 hours. 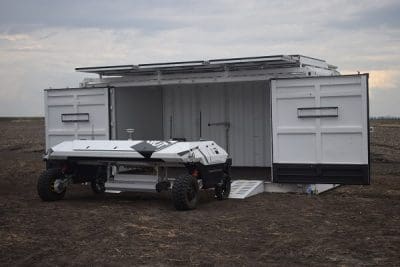 The robot uses its laser guidance system to reverse into the custom-made container where it automatically docks to recharge its batteries.

When the batteries need recharging, the robot uses its laser guidance system to reverse into a custom-built container where it automatically docks onto a recharging pod powered from solar panels on the roof. The batteries can be recharged in about three hours.

The robot can also automatically dock with a liquid transfer facility to refill its 200-litre spray tank.