GRAIN sorghum grown in narrow row spacing trials in the tough summer just past showed the configuration had no adverse impact on yields, did not increase lodging, reduced weed populations and had potential to increase fallow efficiency.

Speaking at a Grains Research and Development Corporation Update at Pittsworth on Queensland’s Darling Downs, Pacific Seeds summer grains agronomist, Trevor Philp, said the company grew sorghum on narrow rows in a series of trials across the northern farming zone.

He said there was renewed interest in growing sorghum on narrow rows due to:

“We have problems with resistant weeds and a lack of herbicides coming through. Sorghum is not a huge crop so we are not likely to get a lot of new chemistry for sorghum, so we have to find other tactics to cope with weeds,” he said. 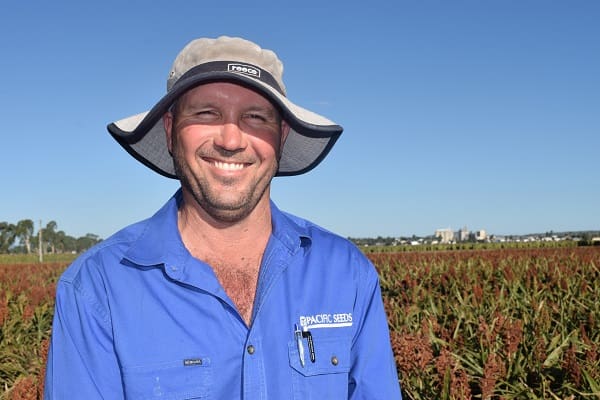 The Pacific Seeds trials in the 2017-18 season grew sorghum on 50cm, 75cm and 100cm rows to assess the effect of the narrower rows on yield, grain quality and weed populations.

Mr Philp said overall, the trials demonstrated there was no consistent difference in yield by row width.

While water use wasn’t measured, he suggested the 50cm rows may use soil water at a faster rate in the vegetative phase and potentially increase the chance of stress prior to flowering.

“The combination of an appropriate hybrid and plant density and the 50cm row spacing has the potential to improve the sorghum crop’s competition against weeds, reducing weed seed set and improving yields,” he said.

“This system has potential to improve the fallow efficiency of the overall system, as well as lifting the sorghum yield and reliability in most seasons.

Mr Philp cautioned that developing suitable hybrids for such a system could take a long time – up to eight to 10 years.

“I am not advocating everybody get the combine out next year and go back to narrow row sorghum. We are not at that stage yet,” he said.

Mr Philp said one of the challenges for the plant breeding industry was overcoming the incidence of lodging which he described as “the single biggest hurdle to yield improvement for grain sorghum”.

He said there were many years when producers weren’t prepared to take the risk of growing the better yielding, but lodging prone, hybrids because they were worried about what might happen to the crop.

He cited the example of the potential return the industry missed out on four years ago when growers on the Darling Downs weren’t prepared to take the risk on higher yielding lines.

“In 2014, although we had soil water we didn’t get winter crop in. There were 53,000 hectares of extra long fallow on the Darling Downs,” he said.

“If we had grown one of the high-yielding sorghums across that it would be 1-2 tonnes/hectare better than a standard Buster (variety). At $230/t, that is $12 million worth of grain.

“A lot of people won’t do it because they are worried about what happens if it goes wrong. That would have been on soil that had over 200 millimetres of soil water. It should have had those types of sorghum on it, but we were not game.”

Mr Philp said the incidence of lodging was hard to predict year to year.

“In some years if there is a lot of yield on the long-season hybrids they will be the ones that fall over and the quick hybrids will stand up,” he said.

“In the year just gone, a lot of the fast-maturity crops went over which I’ve never seen during my time at Pacific Seeds. I always expect the high-yielding, later-season crops to go over. But we had medium-quicks and mediums going over worse than the long season.”

Mr Philp said one of the trigger points for lodging was soils that had low levels of potassium.

“The worst lodging is always on the low potassium soils. They don’t have as much water either so they probably run into moisture stress more regular – a double whammy,” he said.

Mr Philp said trials over the last five years showed there were significantly higher levels of lodging in sorghum in Central Queensland than in southern Queensland, and there was virtually none in New South Wales.

“What’s the link? We are not sure at this stage. Central Queensland has the problem they have nice soil on top that is only about 60 centimetres deep, so it can generate yield potential but there is not a big ‘bucket’ underneath. And they have practically no phosphorus or potassium in those soils,” he said.

“Potassium levels are running out in south east Queensland. Trial sites there this year that had heavy lodging were all low potassium.

“NSW has less (lodging), except when you get up into the basalt uplands around Inverell and Warialda where there are some lodging issues.”