GRAIN storage and handling equipment manufacturers are working overtime to meet a surge in demand for silos, field bins and grain moving machinery as growers gear up for a potentially super-sized winter crop harvest. 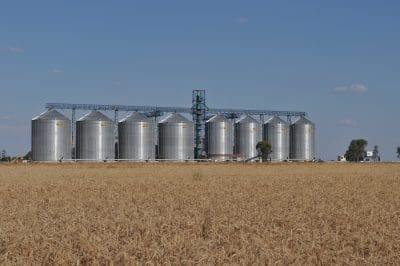 Grain moving equipment and silos are in big demand this year.

“All of our facilities in NSW, Queensland, Victoria, South Australia and Tasmania have been running at maximum capacity for our site construction and transportable (pre-fabricated) silos since March and we haven’t been able to get on top of demand yet,” he said.

Mr Barrett said it was not only the immediate prospect of a massive winter crop that was driving demand, but also a longer term trend of growers investing in building on-farm storage and handling infrastructure to gain greater security and control over their businesses.

“Seasonality has been the main driver in recent months, but before that there have been a few other factors,” he said.

“The ongoing direction is for increasing on-farm storage because headers are getting faster, so the ability to get product away from the headers is a challenge. So people are trying to take some of the surge out of the harvest pressure.

“The other aspect in certain regions like Central NSW is there is a lot of domestic demand generated by the export container market. That is really starting to draw a lot of product in, therefore a lot of product is being stored on-farm to go into those opportunistic markets.

“In other areas, there is a general trend for people wanting to be more in control of their own destiny.”

Mr Barrett said the Federal Government’s tax write off for equipment purchases valued up to $20,000 for businesses with an annual turnover of up to $10 million had helped drive early demand.

“It had a fair impact at the start of the season to generate or bring forward demand. The way the season has gone, demand has continued to increase from there,” he said.

“There is a lot of confidence. It is a good year and we are working with our clients to get concrete down so we can deliver the product they have ordered. With the weather event coming through this weekend, it’s not going to get any easier.

“We already have orders for next year and we expect to see this continue to increase.”

In Western Australia, DE Engineers owner, Kevin Trater, Bellevue, said it was a year like no other, describing it as “a perfect storm”.

After five years of drought, then three years of reasonable seasons, Mr Trater said growers were taking advantage of the recovery to upgrade their grain handling and storage capabilities.

“People weren’t spending over the five years of drought. Then the first year out of it they didn’t spend a dollar; last year was quite good for us with sales; and this year everything we had in stock was sold before the end of July,” he said.

“In saying that, we now have 40 men on full time running two workshops. We have a really talented crew building a lot of equipment and we are in a position where we are still taking a lot of orders and can still supply into October and November.”

Mr Trater said while the price of wheat was low, growers still needed to gear up to handle what had the potential to be a massive crop.

“There might be less money in it, but with such a big crop growers need the handling equipment to get it off,” he said.

“With the cost incurred to handle the crop and the price of the crop being down, a lot of guys are buying large storages of 100 to 150-tonne silos to put grain away either for next year’s feed or for sale when the price bounces back. If they can they will hang onto it and sell it off later.

“I have had one customer who bought 300-tonne silos to drought-proof themselves for feed while the price is down.”

In central NSW, Allied Grain Systems on-farm storage manager, Brian Smith, Young, said demand earlier in the season had been so great his company had had to close its books in early April for the rest of the year and has had to knock back further orders.

Mr Smith said while he would have been able to get more silos, “you have to have quality site teams to build them and you just can’t train someone overnight”.

“Demand this year has been higher than previous years, especially for guaranteed sealed storage that exceeds the Australian standards,” he said.

“People are looking for quality because a lot of insects are building up resistance to a lot of the chemicals. To get a good kill and fumigation result they have to have sealed storage.”

“There is potential for a ‘bin buster’ harvest but we still have a few months to go yet,” he said.

“With the low price/high volume year for grain, growers are looking at storing more grain on-farm and hanging onto it. There has been a big take up of bags and machines. The machines are nearly all sold.”