Russian Wheat Aphid has been confirmed in a wheat crop in northern NSW. (Photo GRDC)

RUSSIAN wheat aphid (RWA) has been confirmed in a wheat crop in the Coonabarabran region in northern New South Wales, more than 400 kilometres north of the previous detection site.

Confirming the detection, the NSW Department of Primary Industry (DPI) said that prior to this detection, the most northern point where RWA had been detected was Lake Cargelligo in the central west of the state.

RWA is a major pest of cereal crops, injecting toxins into the plant during feeding which retards growth and, with heavy infestations, can potentially kill the plant.

The aphid was first detected in South Australia’s Mid North in mid-May, 2016, and has since been confirmed in Victoria, southern NSW and Tasmania.

In the past month there has been a confirmed report of RWA at Eugowra in central western NSW, as well as suspected sightings in the Condobolin region.

Incidents of RWA in south eastern Australian cereal crops this season have been low, according to data collected as a part of the new GRDC investment ‘Russian wheat aphid risk assessment and regional thresholds’.

The data has been collected by the South Australian Research and Development Institute (SARDI), a division of Primary Industries and Regions SA via 15 trial sites set up in SA, Victoria, Tasmania, and NSW. 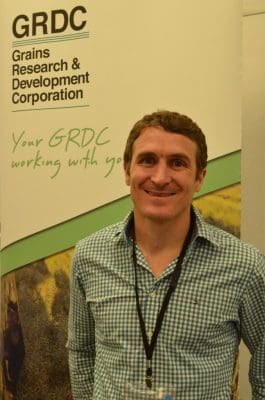 However, he said while aphids were known to disperse long distances on wind currents, it was difficult to predict how quickly they would move north and west across Australia.

Management thresholds are currently being validated for local conditions and cereal varieties through the new GRDC investment.

A number of beneficial insects, predatory beetles, hover flies and other species, including parasitic wasps, can exert effective biological control over the aphid and this is a research area that will be investigated further within the current investment.

RWA populations tend to be their highest in spring and are relatively common in autumn, with numbers dropping off in the colder, wetter months of winter and in the heat of summer.

For those working in the paddock the symptoms of RWA are generally easier to spot than the aphids themselves.

When RWA feeds it introduces a toxin into the plant causing symptoms such as leaf rolling, lengthwise streaks (pale or purple), and stunting.

However, not all hosts are equally as suitable for RWA production and development, and therefore symptoms may not always be obvious.

RWA has already been declared established in NSW and is no longer a notifiable pest, however the NSW Department of Primary Industries and cesar are interested in hearing about incidences in previously unreported areas.

Dr Umina speaks about the status of RWA in Australia as this week’s guest on the new GRDC podcast series. To listen, direct links to iTunes or Soundcloud from https://grdc.com.au/podcasts or use this URL to listen from your desktop.