RUTHERGLEN bug (RGB) has been an increasingly frequent and very problematic pest for grain growers in Queensland and New South Wales over the past 10 years, but recently observed behaviours are causing further concerns. 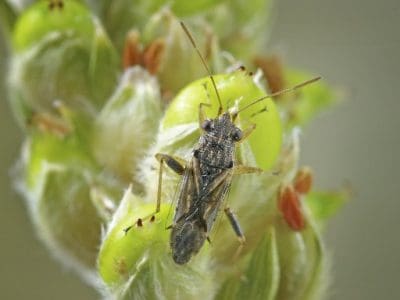 Large numbers of RGB, which breed in canola, have caused damage to establishing summer crops.

Queensland Department of Agriculture and Fisheries (DAF) senior entomologist, Dr Melina Miles, said over the past four years agronomists had observed large numbers of RGB, which breed in canola, have caused damage to establishing summer crops.

This type of damage is in addition to the significant yield losses that can be attributed to RGB adults in sorghum and sunflowers during grain fill.

“Our observation of this damage in seedling summer crops is relatively new,” Dr Miles said.

“To date very little research has been focused on the phenomenon RGB movement from canola stubble to damage an establishing summer crop.

“DAF entomologists have done some preliminary work, which has provided some insight, but there needs to be further research in this area.”

RGB nymphs at all developmental stages and adults typically move en masse from canola stubble as it dries down in October-November, with the movement occurring in all directions.

Dr Miles said it appeared to be an exodus rather than direct movement towards summer crops.

“In southern Australia, the same movement occurs and is of little consequence as there are no summer crops,” she said. 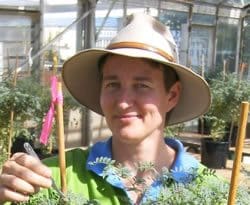 “In contrast to summer cropping regions further north, in central NSW, the benefit that RGB provide by feeding on and killing canola regrowth, volunteers and weeds is appreciated by growers as a benefit.

“Where RGB are moving into summer crop, they will congregate on seedlings and the sheer impact of feeding results in plant dehydration and death.

“Repeated spraying of crop edges slows the movement of the RGB further into the summer crop, but does not prevent the death of plants in rows closest to the canola. The movement from the canola stubble can continue for weeks.”

The absence of effective, long residual products that can be applied to bare earth between canola stubble and summer crops is a major constraint in having a simple management option.

“The three key approaches we are researching this year, include preventing the build-up of RGB, effective barriers to the movement from stubble to summer crop and reducing RGB populations in summer crop,” she said.

“Findings showed that while all registered products were effective when directly contacting adult RGB, in the field. When RGB populations are large it is unlikely that commercial application will get good direct contact on all individuals, so that the residual efficacy of the insecticides becomes important.

“What is clear from these results is that the residual efficacy of the treatments varies, with rapid deterioration of synthetic pyrethroids after three days, in contrast to the longer persistence of the organophosphates.”