The worker was killed when part of a broken disc struck the worker’s chest. It appears that due to the high impact of the projectile it caused fatal internal injuries.

In another incident the disc jammed and the angle grinder kicked back and cut the worker’s wrist.

One major contributing factor is the use of cutting discs that are too large for the angle grinder. In some cases the guards have been removed and the grinder fitted with a 14 inch (356 mm) cut-off disc.

Larger angle grinders are manufactured with lower revolutions per minute (RPM) speeds than smaller angle grinders, so that the edge speed of the disc always remains around 70 m/s.

The photograph below shows an angle grinder with the wrong size cutting disc fitted and the guard removed. Discs are not designed for the higher speed, and if used, risk the possibility of the disc shattering and striking the user and others. 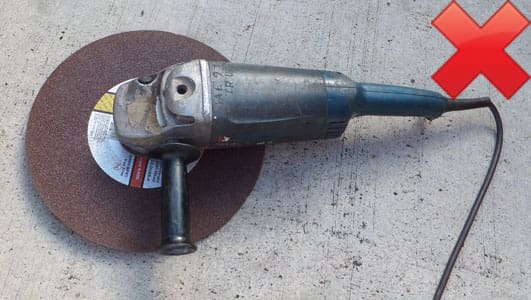 Guards should be provided and used on all power tools where there is a risk of the disc ejecting, disintegrating or cutting the worker. If the guard has been removed:

Another factor that increases the risk of disc failure is when the central disc hole size is too large for the spindle flange on the angle grinder. As the disc diameter increases so will the hole size.

For example, the hole size of a 14 inch (356 mm) cut-off wheel is typically 25.4 mm compared to 22.3 mm on a 9 inch (230 mm) cutting disc (see Photograph 2). If the disc hole is too big for the spindle flange, the disc may be off centre, become unbalanced, vibrate excessively and rapidly lead to it shattering. 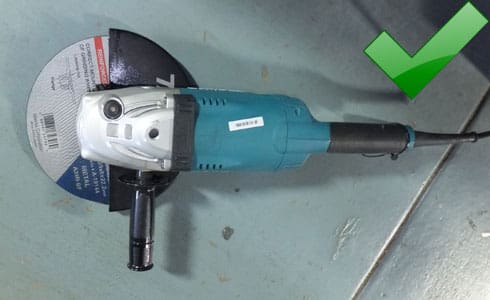 Note: 9 inch (230 mm) angle grinders have been banned on some work sites due to the increased risk of injury. The increased power and size of the unit will cause more severe kickback and gyroscopic effects (i.e. makes the grinder difficult to manoeuvre). A risk assessment to identify alternative methods and tools should be carried out prior to selecting a 9 inch (230 mm) angle grinder.