Merridee and Mark Schilling in a paddock of Vixen wheat.

MALTING barley has wriggled back into Mark and Merridee Schilling’s farming operation on South Australia’s northern Yorke Peninsula (YP) as a supplement to its long-held lentil-wheat rotation.

Located south-east of Kadina, the farm is around 150 kilometres from the Coopers malting plant in Adelaide, the destination for all the malting barley the Schillings produce.

Most of the malt Coopers makes goes into its own brewery, but some is bought back by the family business, AG Schilling, and sent to a craft brewer at Clare in the nearby Mid North as the malt in Yorke Premium beer.

The result goes back to AG Schilling to promote the kind of provenance Mr Schilling believes is crucial if Australian grain-growers are going to get serious about value adding.

It also makes the ideal farm “merch” for visitors.

“Instead of giving them a cap, I give them a beer,” Mr Schilling said.

The Schilling family is coming up to its centenary on the farm, and malting barley had been a major crop in previous decades.

“We stopped growing malting barley for a while because we just couldn’t meet the targets.”

That was through the 1990s and into the 2000s, when deregulation of South Australia’s barley market was occurring.

Mr Schilling said a lack of competition pre-deregulation was tough on the grower.

“You’d send your malt down and get Schooner 3; dynamic binning never worked for the farmer.”

As malting barley petered out in the rotation, wheat became the only cereal.

Aside from varietal improvements, and its fit with lentils in rotation, wheat’s yield response to urea was compelling.

AG Schilling crops around 2500 hectares, and wheat has fallen from 50pc of area to more like 43pc, barley to 7pc with lentils making up the balance.

“Lentils are a big part of our business; they are 50pc of our production.”

Lentils have become hugely popular in SA growing areas close to the coast as the rotation crop of choice because they are far less susceptible to snails than previously grown pulses such as field peas.

After continuous cropping for 30 years, and a straight wheat-lentil rotation for much of this century, Mr Schilling feels it is time for an agronomic change and barley is part of that.

“We’re putting too much pressure on IMI chemistry.”

The problem for growers on YP, as with many other parts of southern Australia, is ryegrass.

On wheat, they are this growing Vixen as well as LRPB Anvil, an IMI-tolerant, AH variety bred by Grains Innovation Australia, of which Mr Schilling is a director.

AG Schilling is now growing around 200ha per annum of Maximus barley, the malt from which has higher diastatic power than Banks, the variety that brought malting back to AG Schilling.

“Coopers takes the lot; we store it here, and we send a truck down when they want one.”

The price per tonne is agreed privately, and is part of Coopers procurement strategy for the barley which goes into producing around 50,000 tonnes of malt per annum.

Working with agtech company Trust Provenance and Grain Producers SA members including AG Schilling, Coopers is also the final stage for a project which is tracking and tracing barley from paddock to beverage.

Mr Schilling said it is the kind of innovation that can foster not only appropriate pricing for growers, and consumer confidence, but enshrine honesty with regards to chemical use and payment of end-point royalties on the production side.

“It’s digitally tracking everything we do.”

“The digital space is here.”

“We built seven sheds in seven years, and got 30,000t of storage, and that then gave me an opportunity to find out how to store.” 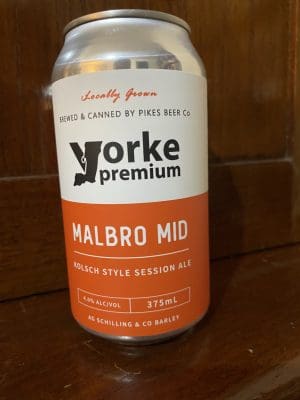 On malting, it means the business can discreetly store its malting barley per paddock and variety for outturn to Coopers maltster Doug Stewart.

“Silo bags have been terrific; we put 250t in each of them, and we do three bags for Doug.”

The Schillings supply up to 2000t wheat a year into Adelaide for use in Indian flatbreads, and sell the rest of their wheat into the domestic market.

This marks a turnaround from when the family business was packing containers with lentils bound for south Asia, and with malting barley for China, the market which brought it back to the Schilling rotation.

“We went cold on it; then China came on board.”

As Northern Yorke Processing, AG Schilling has a registered container-packing site which pre-COVID often afforded better returns than could be achieved through bulk sales.

“For $10 a tonne, we could do it ourselves; a lot of companies were doing it.”

Mr Schilling said the expense and uncertainty of the container trade in recent years has seen them suspend their on-site packing.

He said competition from traders accumulating for SA bulk business made container packing an unprofitable proposition at present.