RESEARCHERS in Western Australia have discovered that the common barley disease, net form of net blotch (NFNB), is showing resistance to fungicide at five locations in the state. 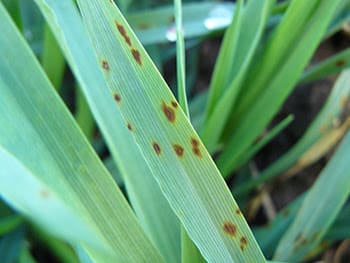 Net form of net blotch disease in barley is showing resistance to fungicide.

A study conducted by researchers at the Centre for Crop and Disease Management (CCDM), which is co-funded by Curtin University and the Grains Research and Development Corporation (GRDC), has revealed that NFNB has shown a large reduction in sensitivity to the fungicide tebuconazole.

And it has shown a smaller reduction in sensitivity to other related fungicides, such as epoxiconazole, prothioconazole and propiconazole.

“If we’re to have any chance of slowing down the rise of resistant mutations, growers and agronomists must think of chemical applications as complementary to disease prevention strategies – relying solely on fungicides to control disease is no longer sustainable,” he said.

They found the enzyme within the fungus targeted by the fungicide was present in much higher amounts than normal.

According to Dr Lopez-Ruiz, an increase in the enzyme amount means more fungicide is required to control the disease.

“Also, for the first time, we have found a mutation within the fungal DNA that has changed the shape of the target enzyme, which means the fungicide binds to it less effectively,” he said.

“Therefore, the resistant NFNB populations are working against fungicides in two key ways: they are producing more fungicide targets (enzymes) and the shape of those targets have changed.”

However, tebuconazole was not, and growers should be mindful that NFNB may be present when applying tebuconazole to control other barley diseases. This may contribute to NFNB issues in subsequent seasons.

“It is more important than ever to implement stubble management and crop rotations and to choose disease resistant cultivars; and when fungicides are used, to play it safe and use fungicide mixtures, or rotation of fungicides from different modes of action when possible,” Dr Lopez-Ruiz said.

The CCDM Fungicide Resistance Group will continue to monitor the disease for the spread of resistance over the 2016 season and is calling for samples from the eastern states.

“So far only a small number of NFNB samples have been tested from across the eastern states of Australia, in which all samples tested negative for resistance,” Dr Lopez-Ruiz said.

“However, a large scale analysis is required to determine whether resistance has developed outside of WA.

“If you think you have fungicide resistance of any disease, please send a leaf sample for diagnosis of resistance to our Fungicide Resistance Group.”

For a net form of net blotch sampling kit, contact the Fungicide Resistance Group by email [email protected] or phone (08) 9266 1204.