AN INTERNATIONAL research project to rewire hybrid seeds so they can be retained and resown to produce identical, next-generation plants is being touted as a potential “game-changer” for farmers everywhere, including within Australia’s sorghum breeding program.

But these traits are not preserved in any of the seeds the hybrid plant produces because they form via sexual seed formation; a pathway requiring meiosis and fertilisation. 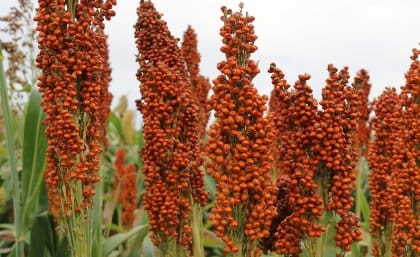 “The key to preserving the seed yield gains of hybrids from one generation to the next lies with one of the quirkiest aspects of plant reproductive biology: ‘apomixis’ – a naturally occurring asexual seed formation pathway in plants,” she said.

“If a high quality hybrid seed is equipped with genetic switches to allow it to produce a plant with new seeds asexually, that is, without meiosis and fertilisation, the resulting seeds would produce plants that are identical clones of the hybrid parent.

“This would allow hybrid seed to be retained and re-sown on-farm for a number of generations, with the farmer able to realise yield gains and pocket the cost of purchasing hybrid seed each year.”

The Hy-Gain project, which involves six research organisations and a multinational seed company, follows a prior five-year project led by Professor Koltunow, also funded in part by the Bill & Melinda Gates Foundation.

Professor Koltunow said one of the most striking aspects identified in the previous research was the relatively small number of changes required to switch from the sexual to an asexual mode of seed formation. “In Hy-Gain, we are developing plant prototypes to test if we can lock in those valuable hybrid characteristics over generations when the hybrid seed is planted, flowers, and produces more seed,” she said.

“The goal is to deliver African-adapted sorghum and cowpea varieties with improved yield and resilience traits, targeted to specific regions.

“The Hy-Gain team is aiming for forward delivery of a very useful technology that can be readily, and cheaply, used in breeding.

“In-country cowpea and sorghum breeders need to be able to make decisions on varieties to develop in their regions, as they are connected with their farming communities.”

Professor Koltunow said, if successful, the Hy-Gain technology is a potential “game-changer” for farmers throughout the world.

“This technology could enable much more effective plant breeding and seed production at a time when the grains industry is dealing with the challenge of maintaining yields under increasingly hotter and drier growing conditions,” Professor Koltunow said.

Strong linkage to the Department of Agriculture and Fisheries, Queensland with their sorghum and legume breeding programs and facilities, provides significant opportunity for future crop testing.

This project is funded in part by the Bill & Melinda Gates Foundation with further support from The University of Queensland and the Department of Agriculture and Fisheries, Queensland.