Seamer set to be game-changer for chickpea industry

AS farmers battle widespread outbreaks of Ascochyta blight in chickpeas this season, the future looks a little brighter with the chance to plant a new desi variety next season, PBA Seamer, which has the highest resistance rating yet for the devastating disease. 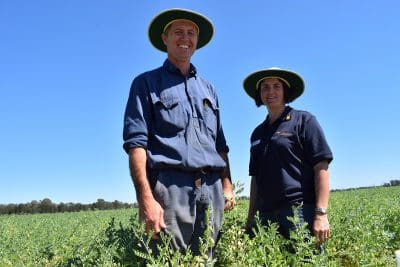 “It is the first time we have been able to label a new desi chickpea variety with an R (Resistant) rating for Ascochyta blight. We have waited a long time,” Dr Ryan said.

“The current varieties come in as MR (Moderately Resistant), but this R rating will enable growers to reduce fungicide costs and change their fungicide regimes.

“It has dual disease resistance to Ascochyta and the best level of Phytophthora resistance equivalent to Hat Trick, coupled with yield and quality gain, good lodging resistance, earlier flowering, stands well, semi-erect and ticks all the boxes in terms of seed quality and size.”

Seamer was developed by the Pulse Breeding Australia (PBA) chickpea breeding program. It is a cross between a line selected in the early 2000s from the Phytophthora nursery at the Hermitage Research Station, Warwick, and one of the industry’s leading lines, PBA Hat Trick.

Dr Ryan said the new variety had broad adaptation across the northern growing regions from Clermont in central Queensland to Dubbo in central NSW.

Importantly, it would have a place in Central Queensland where growers tended to grow fully Ascochyta-susceptible varieties because more resistant lines, such as Hat Trick and Boundary, didn’t work so well because of a yield penalty.

“So when growers there are going from fully susceptible varieties like Kyabra and Pistol, Seamer is totally a game-changer for them to be able to move right through the disease resistance scale to an R and not lose very much yield,” she said.

Dr Ryan said Seamer had been tested in yield trials since 2007 and had been put under resistance pressure in some tough years of Ascochyta infection, such as 2010 and again this year.

“In NSW there was an eight to 42 per cent yield gain with Seamer in highly infected sites. But we also do an annual constructed Ascochyta yield loss trial where we quantify the yield loss due to genetics,” she said.

Dr Ryan said with Ascochyta in the forefront of growers’ minds this season, she expected demand for Seamer to be very high in 2017. 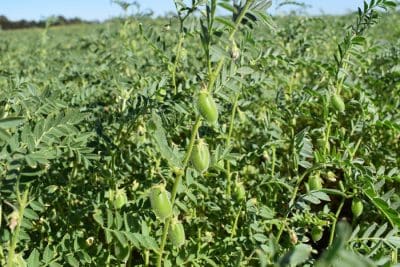 PBA Seamer chickpeas are set to be a game-changer for chickpea growers in the northern farming region.

“Next season, I think the seed for Seamer will be sold out if PBA Hat Trick is anything to go by in its first year,” she said.

“(Seed supplier) Seednet could possibly have gone last year with Seamer but they held off in order to have massive amounts of seed for next year.”

Dr Ryan said there were other promising lines coming through the breeding program that offered some yield gain on Hat Trick and maintained the level of Ascochyta resistance.

“We are looking at MR or R level varieties that will hopefully give us a yield gain we haven’t quite seen in Seamer,” she said.

The trials compared row spacings from 25 centimetres to one-metre.

“We are finding the best yields at 25cm in all seasons. We have seen up to 900 kilograms/hectare difference between 25cm and one metre,” he said.

Mr McKenzie said while growers needed to be aware of a greater risk of fungal diseases when putting rows closer together, the trials still showed the yield advantage outweighed the disease threat over the long term.

“We can show a yield benefit from narrower rows in every year, whereas disease might only come one in eight or 10 years,” he said.

“We have also had various combinations of plant populations but have found the current recommendation of 25 to 30 plants per square metre still holds true, even at different row spacings. So if you are going to change row spacings, still keep the same plant population,” he said.

PBA Seamer is protected under Plant Breeder’s rights (PBR) legislation. Growers can only retain seed from their production of PBA SeamerA for their own use.

An end point royalty (EPR) of $4.40 per tonne (GST inclusive), which includes breeder royalties, applies upon delivery of this variety.

Seed is available from Seednet.