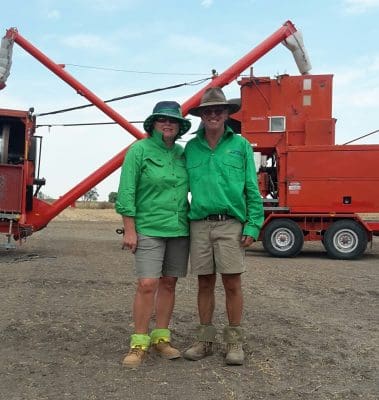 Cathy and Bruce Gundill spend five months a year on the road with their business which is now on the market.

What he found was that between sorghum, cotton and winter-crop, the growers were too busy to think about cleaning their own grain; what they wanted was a service provider, and so Gundill Grain Cleaning was born.

Operated by Bruce and his wife, Cathy, it has grown into one of Australia’s biggest mobile seed-cleaning and grading business, and has given the Gundills a bird’s-eye view of changing farm practices in their core area around the NSW/Qld border between Moree, Goondiwindi and Mungindi.

“We’re still grading out phalaris, wild turnip, and black oats, but there is a lot less coming out now than there used to be,” Mr Gundill said.

“Overall, I believe the weed seed bank has gotten lower because growers are making better use of herbicides and rotations in their management, but a wet year like last year with rain late in the season can put the pressure back on.”

These days, the Gundills clean seed primarily to help ensure what goes into the air seeder gives growers the most even and healthiest plant possible.

The “rubbish” can be chaff that the harvester failed to blow out, sticks or other foreign material, or screenings, particularly in dry finishes, when crown rot is most likely to rear its ugly head.

“That small or damaged seed isn’t going to have the vigour when it’s planted, or flow as well in the air seeder, and that’s where the value for the grower lies today, in getting a more even germination,” he said.

“If it’s not good seed and good seed only in your planter, it runs the risk of clogging up the machine, and that’s where you really lose productivity.”

The Gundills said the addition of pulses to farm rotations prompted the business to buy a dedicated pulse grader from Denmark.

“That machine, in conjunction with the Nufab, will grade chickpeas and faba beans to get them to a seed-grade standard.”

Mr Gundill said pulses were a big part of the business, both for grading for sale, and for cleaning for planting.

“Some of our clients are growing up to 40 or 50 per cent chickpeas these days in their winter crop.”

Phil Tonkin and family farm west of Mungindi, and have been Gundill clients for 15 years.

Mr Tonkin said they get the Gundills to clean their seed to not only aid flow through the air seeder, but to minimise the chances of building up herbicide resistance.

“We don’t want to be planting 2pc black outs, including a percentage that’s resistant to the chemicals we use.”

Mr Tonkin said the cost worked out at around 75 cents per hectare for wheat.

“It’s one of the cheapest things you’ll do, and it gets us into the habit of getting organised with our seed for the next crop.

“We supply one man and some equipment, and the Gundills do the rest. Cathy takes a sample from midway through the silo, and bags and labels it, so we can then do a germination test to determine whether that seed is right for planting.”

The Gundills have cleaned wheat, chickpeas, barley and oats for the Tonkins, and were called upon in January to get New Zealand spinach seed out of chickpeas.

“It was a real problem because of the wet season we had, and we couldn’t get rid of the chickpeas with that seed in it.”

“We dry hired his machines, which he set up for us, and they got everything out that wasn’t supposed to be in there.”

When the Gundills started out in 1998, it was a grain-pricing structure that got them off to a flying start. 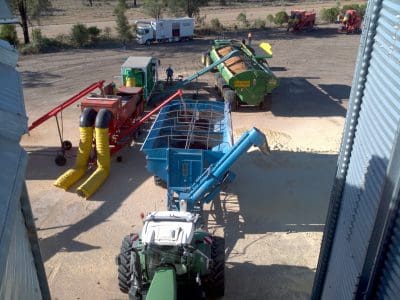 “That was back in the days of the cliff face, when if you went over 4.9 per cent admixture at delivery, you would drop a grade and it would automatically cost you $80-$100/t,” Mr Gundill said.

“People were really frightened about copping a penalty of that size, so they could immediately see the value in grading, and we could grade 20 tonnes an hour with our unit, while a lot of the existing operators could only do 7-8/t.”

AWB replaced the cliff face with a Golden Rewards sliding scale, where a premium was paid for admixture of 3pc or less, and a sliding scale was introduced to discount percentages which exceeded this; GrainCorp’s Croptimiser system now performs a similar function.

“Golden Rewards really changed the focus of our business from grading to a market specification to cleaning seed for planting, but we do still grade.”

The Gundill plant includes Nufab machines from WA, as well as indent machines the couple have built themselves.

Some units are dry hired, but the Gundills do most of the operation’s hard yards between November and April.

“Cathy and I live in our motorhome for five months so we can camp within 100m of where we’re working. We have a worker as well, and between us, we can clean 200-300t a day of seed.”

Most of the Gundill clients have around 500-1,000t for them to clean, which means a three to five-day annual stay at most places.

“Each year we might drop a couple of customers because the property is sold or there’s a change in management, but we usually pick up a couple of new ones.”

The Gundills live in Toowoomba, and house the plant at nearby Southbrook.

Last year they decided it was time to do something else, and the business is now on the market. 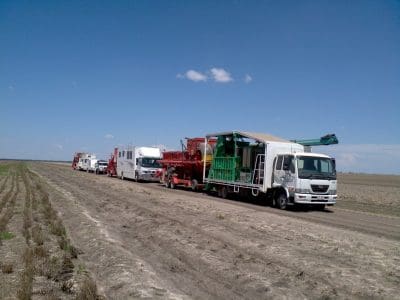 “Cathy and I have really enjoyed going out year in and year out, and watching the farming get better and better, and seeing the families grow.”

They have already sold two of their nine units to a young Toowoomba-based operator who is now servicing the Gundill clients west of Goondiwindi.

That leaves seven units in the business.

“We would love to see someone younger than us buy the business and take it to the next level.”

Mr Gundill, who hails from a farm at Three Springs, southeast of Geraldton, WA. said growers in northwest NSW and southern Queensland seemed to be a long way off having the weed burden that those in WA were dealing with.

“In WA, resistant weeds like ryegrass, brome grass and wild oats are big problems, and that’s why some farmers have invested in their own units to grade prior to delivery, and also do their own seed cleaning.

“Over here, farmers are a lot busier with two or three crops a year. It’s time that matters, and it’s why seed cleaners in general are so busy everywhere.

We have as many customers as we can comfortably service, and most other seed-cleaning businesses are in the same boat.”

The Tonkins are among the many who will be sorry to see the Gundill convoy pull out for the last time.

“We’ve got to know them pretty well over the years, and we’re going to miss them.”