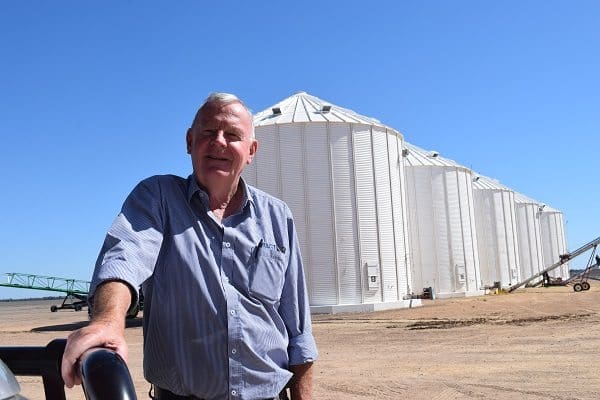 AGT’s northern regional manager, Kerrie Gleeson, is set to retire at the end of June after a 50-year career in the seeds industry.

IF anyone knows a thing or two about the Australasian seed industry it’s Kerrie Gleeson.

The affable Australian Grain Technologies northern regional manager clocked up 50 years in the industry in February and is set to bow out at the end of June when he moves on to a well-earned retirement.

Formerly a ‘Kiwi’ and now an ‘Aussie’, Mr Gleeson spent the first 24 years of his career in the New Zealand seed industry before moving to Australia in 1992 on a three-year secondment as general manager with Wright Stevenson Seeds involved with temperate and tropical pasture species and turf, based in Sydney.

“As we were only going to be in Australia for three years we did a lot of travelling to see the country. But, in 1995, half way through my secondment, the company said they were going to take us back to New Zealand,” he said.

“I asked the family if we wanted to go back – and we decided to stay. So, I pulled the pin on the company and thought “What am I going to do now?”

Fortunately, Mr Gleeson had a call from IAMA who were looking for a person with the expertise to get them into the seed business. He was appointed national seed manager.

In that role he was instrumental in setting up the SGB Australia business, which later became PlantTech.

Mr Gleeson looked at options outside the seed industry – including running caravan parks, and even buying a newsagency – before putting his file and seed industry credentials back on ‘active’ in an employment agency.

Fortuitously, it was around the time wheat breeding in Australia was changing from the public sector to the private sector with the introduction of end-point royalties which meant the breeder could get a return anywhere in the supply chain.

Mr Gleeson said there were three companies set up, primarily to take advantage of the opportunity:

He was appointed CEO of SunPrime in 2001 based in Dubbo in central west New South Wales.

“We were the smallest of the wheat breeding organisations, but we were the only ones to do our own production, marketing and collection of end-point royalties,” he said.

“We had a very successful variety, H45, which was very dominant in the southern areas. We were over 1 million tonnes with it which was very good in those days. The end-point royalties at that time were $1/tonne.

“But, then there was a change in rust pathotypes. Suddenly H45 became very susceptible. At the same time we had a couple of years of droughts. As an organisation, we knew we weren’t going to survive.

The merger of AGT and SunPrime in 2005 brought together AGT’s network in South Australia and Victoria, and SunPrime’s prominence in NSW and Queensland, to form the largest grain-breeding organisation in the nation. Mr Gleeson said his time with AGT had been “an interesting ride” with the business rising to prominence in the Australian market, largely on the back of a very successful wheat variety, Mace.

“The rapid growth in market share was a result of improvement in yield and Mace having AH classification compared with APW for Wyalkatchem.”

The introduction of Mace and its ultimate success was a close-run thing with Mr Gleeson and his team having to employ some innovative initiatives to get the variety to market.

“One of my involvements was that, because we didn’t have a lot of seed, in 2008 we had 120 kilograms in three 40-kilogram bags which we took up to Kununurra (in WA’s north) and put three hectares in,” he said.

“We harvested about nine tonnes from that in early September and took it down to Tasmania, put it in the ground there about Melbourne Cup Day, and produced 350 tonnes of it over the summer.

“We put that in containers and shipped it to WA. We only had a limited amount of seed in WA at the time so it gave us a lot more seed to market in the autumn of 2009.”

At the same time, Mr Gleeson said the company introduced its Seed Sharing Initiative which was a licence allowing the trade of seed between growers as long as they filled out the paper work and helped them access large quantities of seed quicker.

“So, going from virtually no market share in 2008 when we released Mace, it became the most successful variety in Australia. Currently we have about a 70 per cent market share in WA and South Australia,” he said.

More recently, the company has introduced Scepter, a Mace-type variety that is replacing Mace in WA. 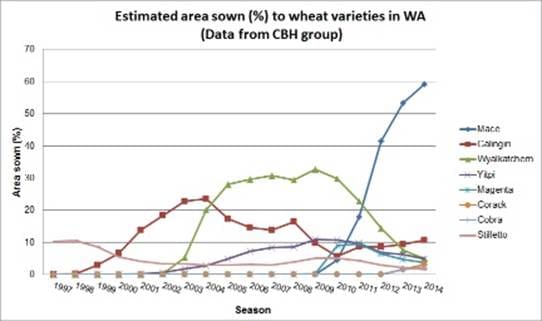 Mr Gleeson points to the introduction of Plant Breeder Rights (PBR) as perhaps the most significant development in the seed industry in the years of his involvement.

“I was fortunate enough to sit on the PBR Advisory Council for a while, which worked extremely well. I think in 2000 when wheat was in the public sector the investment in wheat breeding was about $30 million a year. That figure now is probably $60-$70 million,” he said.

Mr Gleeson said another significant factor in the industry was the rising importance of the sponge and dough market in Asia, a growing market for Australian wheat.

“As a company, along with other breeding companies, you are looking to breed wheat specifically for those markets. In the north, Prime Hard is the target we aim for every time,” he said.

“We have two quality labs where we test wheat at a very early stage for quality.

“YAN (Yellow Alkaline Noodles) noodle colour is very important for us. We are using different things to get that noodle colour for that market.”

When retirement beckons at the end of June, Mr Gleeson hopes to retain his connections with the Australian farming sector.

“I will keep in touch with agriculture. After 50 years you just can’t drop it,” he said.

“We have a caravan, but hopefully I won’t be one of those annoying ‘grey nomads’ on the roads which I have often come across in my travels. We hope to spend time with the children and grandchildren in Sydney.” 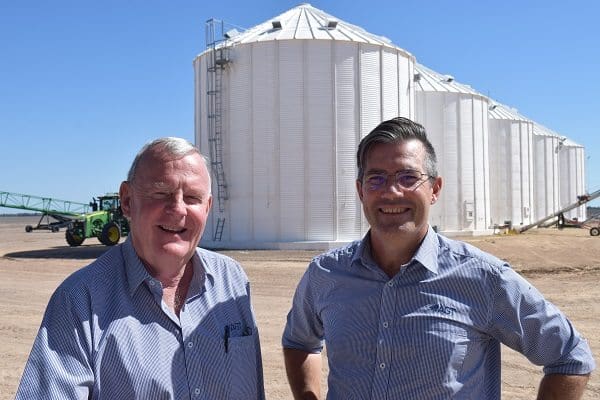 Kerrie Gleeson with Douglas Lush, who is taking over as AGT’s northern regional manager.