THE leaf disease, Septoria tritici blotch (STB), has been identified in commercial wheat crops in NSW for the first time since 2001. 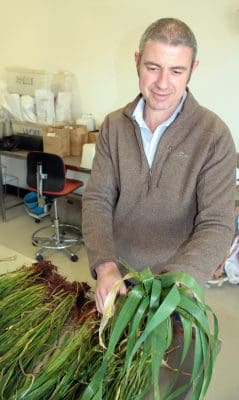 NSW Department of Primary Industries plant pathologist, Andrew Milgate, advises growers to be on the lookout for Septoria tritici blotch which hasn’t been seen in NSW for 15 years.

NSW Department of Primary Industries (DPI) plant pathologist, Andrew Milgate, said growers needed to be on the lookout for the disease – check crops, get a correct diagnosis and take actions recommended by an agronomist.

Dr Milgate said cases of STB infection had been confirmed in wheat crops in the Narromine, Forbes, Young and Coolamon districts.

“The severity of infection is concerning and we urge growers and agronomists to be vigilant and maintain crop inspections to determine if STB or other diseases are present,” he said.

“While STB has been uncommon in NSW for more than a decade, it has become a significant foliar disease in the high rainfall regions of Victoria, South Australia and Tasmania.

In most cases the disease has occurred alongside yellow leaf spot (YLS) and in some the combined severity of infection has warranted advice to spray with fungicide to prevent further losses of leaf area.

Dr Milgate said changes in virulence to variety resistance and the development of fungicide resistance in the Australian STB population were of particular concern.

“Early screening of resistance levels shows most fungicides will be effective in the paddock and to avoid further losses in efficacy growers are urged to use multiple strategies against STB.

“An integrated approach to disease control should include mixes or rotations of fungicides, crop rotation and avoid susceptible cultivars to reduce inoculum. Integrated disease management aimed at reducing the disease burden on crops will lift yields and help prevent fungicide resistance.”

It is critical growers adopt strategies to reduce selection rates of further mutations, to maintain and extend the useful life of currently available fungicides.

One strategy which is expected to slow the selection of strains with higher resistance is to mix or alternate different azoles.

In crops where two fungicide applications are used, different actives should be used each time.

Information and management advice on the disease is available from the Grains Research and Development Corporation.