SCIENTISTS are exploring the potential to expand the production of the ancient oilseed summer crop, sesame, from northern regions to southern Queensland and New South Wales.

Efforts to establish a sesame industry in northern Australia three decades ago failed, due largely to the lack of suitable genetics and processing facilities. But, in the past three years there has been renewed interest in the small-seeded crop with the introduction of new varieties which are high yielding and more resistant to grain shattering at harvest.

According to the Australian Sesame Strategic RD&E Plan (2021-2026), the Australian sesame market is currently made up of a handful of growers across Western Australia, the Northern Territory and Queensland with a total of just 525 hectares planted in 2019.

Speaking at the Broadacre Cropping Initiative (BACI) Research Showcase in Toowoomba, University of Southern Queensland (USQ) Centre for Crop Health research fellow, Dante Adorada, said with the crop’s tolerance of drought and heat, there was potential to significantly increase the area of land planted to sesame.

He said data modelling suggested the industry could grow to in excess of $100 million in north west Queensland alone.

Dr Adorada said there was much suitable land to produce the crop and farmers already had the skills and cropping systems to incorporate it into their summer cropping programs.

He said Australia was also close to Asian markets where there was significant demand for the type of quality sesame that Australia could produce. 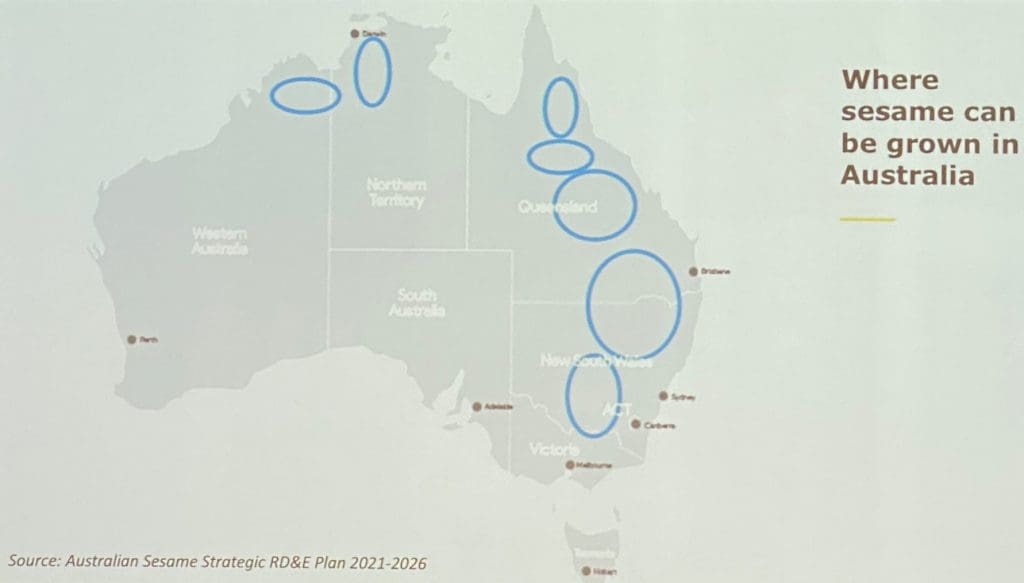 Dr Adorada said globally there were 30 diseases that affected sesame.

He said a BACI project was set up in 2020-21 to run unprotected sesame trials in south eastern Queensland to detect any diseases that were likely to affect the crop.

The research picked up 12 fungal pathogens and six pathogenic species, including charcoal rot.

Dr Adorada said charcoal rot, which is very common in summer crops, could cause between five and 100 per cent yield loss in sesame.

He said fusarium wilt could cause 45pc yield loss; alternaria leaf spot 20 to 50pc; and phytoplasma up to 80pc.

He said researchers would continue to do more surveillance and test different management systems for managing the diseases.