FOR the first time, scientists have mapped shatter resistant genes in Ethiopian mustard plants, a development which offers plant breeders an option to manage pod shatter in canola. 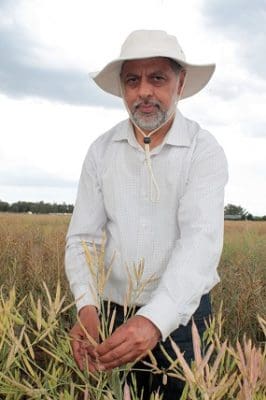 NSW Department of Primary Industries (DPI) researcher, Rosy Raman, said genes from the mustard, Brassica carinata, had the potential to address pod shatter in canola – a problem which could reduce yield by up to 50 per cent.

“We investigated the level of pod shatter resistance in Ethiopian mustard and identified sources which were10 times more shatter tolerant than canola,” Dr Raman said.

“In hot, dry conditions canola pods can shatter and open to release seeds before harvest, causing yield and financial loss to growers.

The ground-breaking research has identified five pod shatter resistant genes as part of a joint project between NSW DPI and the Grains and Research Development Corporation.

“Several elite lines with pod shatter resistance were selected and we plan to deliver them to Australian canola breeders within the next two to three months,” Dr Raman said.

“Molecular markers linked with the genes will be used to trace the presence of DNA segments for pod shatter resistance in the canola genome.

“In addition to lifting yields, pod-shatter resistant canola varieties would reduce the cost of chemical applications to seal pods and manage unwanted canola plants, which are weeds in subsequent crops.”

The research was recently published in a leading international journal Frontiers in Plant Science, https://doi.org/10.3389/fpls.2017.01765