EARLY indications are that estimated crop losses from the heavy rains and flooding that hit Central West NSW over recent weeks are well in excess of $680 million, according to NSW Local Land Services. 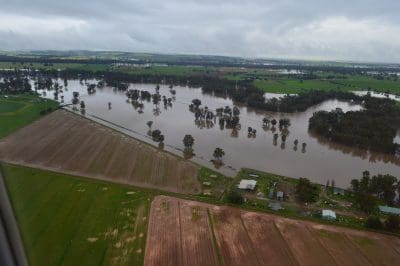 There has been significant damage to crops and pastures in areas inundated by flooding with the worst affected areas including Forbes, Corinella, Condobolin and Nyngan.

Those crops submerged or inundated for long periods will be a complete loss in many cases.

Total agricultural damage estimates are in excess of $720 million, although losses will vary depending on the length and breadth of water inundation, yield loss and the ability to harvest.

To date 145,314 hectares of pasture are estimated to have been affected with many landholders yet to report damage due to access and other issues.

“Weed issues may also be worse in summer and subsequent winter crops due to movement of weed seed with flood waters,” Dr. Hackney said.

“As opposed to most years where we are normally looking for rain at this time of year, farmers are now hoping for dry conditions in coming weeks.

“Substantial rain could still further exacerbate problems with damage extending further to include crops that are currently marginal but may recover in the absence of further rain.”

Local Land Services will be continually assessing agricultural flood damage as a result of significant rainfall recorded across the Central West region over recent weeks.

With further rainfall forecast in the region over the next week, producers are advised to prepare and plan now.

While producers are encouraged to contact their nearest Local Land Services office to report agricultural losses, any immediate calls for assistance should be directed to the State Emergency Service on 132 500.