A THREE-PRONGED action plan could be the best way to minimise the risk of snail contamination of grain this harvest. 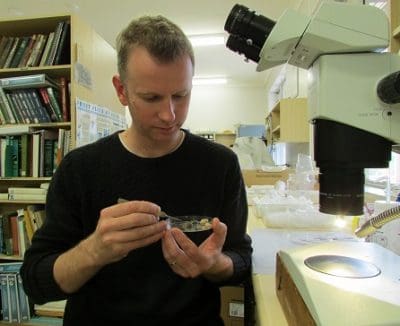 SARDI entomologist Kym Perry says a number of tactics can be employed at harvest to reduce snail contamination.

Minimising the intake of snails into the header, maximising the separation of snails and grain within the header, and post-harvest grain cleaning are three important steps to reducing snail contamination.

“Snails present above cutting height at harvest may enter the header and contaminate grain, potentially causing downgrades or rejection at receival, and they can also clog machinery,” Mr Perry said.

Mr Perry said while there was usually a trade-off between snail removal from grain and grain wastage, a number of tactics – under the three-pronged approach – could be employed at harvest to reduce contamination. 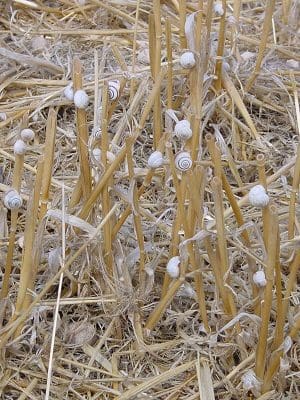 “Growers should in the first instance assess the potential for snail contamination by monitoring around paddock perimeters and other areas where snails are often a problem. Snail densities provide a guide to contamination risk, though there is not always a clear relationship between live snail densities in paddocks and harvest contamination,” Mr Perry said.

Northern and Yorke Regional Landcare facilitator, Michael Richards, who has been leading an innovative project involving the establishment and monitoring of remote video cameras to record the movement and activity of round and conical snails at various locations across SA, agrees.

“In general, cool and moist conditions during harvest result in more snails remaining closer to ground level, while warm and drier conditions are more likely to increase snail densities in the upper canopy.”

He recommends growers prioritise harvesting the most valuable crops and those crops most prone to damage.

Other tactics growers can employ to minimise snail contamination include:

Receival standards for 2017-2018 currently range from 1-10 live or dead snails per 0.5 litre sample, depending on the commodity grade, and are available at http://www.graintrade.org.au/commodity_standards and http://www.viterra.com.au/index.php/receival-standards. The common white snail is a prohibited pest in some export markets.

Mr Perry said minimising the collection of snails at harvest was a key component of a systems approach for snail management, along with in-field control of snail populations (via baiting, cultural management), and post-harvest grain cleaning.

Baiting should have ceased at least two months prior to harvest as there is a zero tolerance for bait contamination of grain.

Where mouse numbers are still at moderate to high levels, extra effort may be required to clean up grain wastage from snail removal to reduce potential food sources for mice over summer.