The reduction in available supplies in the European Union (EU), down 4.4Mt, arose mostly as the EU experienced lower production resulting from dryness in the north.

Australia’s availability was down 2Mt, Russia down 1.5 and Ukraine down 1Mt.

While the smaller crop would significantly reduce 2018/19 wheat export trade from the EU, Russia, Ukraine and Australia, at the same time export opportunity would be boosted for Canada, US and Kazakhstan, resulting in a record global wheat trade forecast.

The higher trade estimate was driven by strong demand resulting from rising incomes and shifting diets largely in Asia and Africa.

To satisfy growing demand through the current period of smaller crops, inevitably stocks in exporting countries would shrink (Table 1).

After several years of record production and large carry-in supplies, major exporter ending stocks are forecast to decline about 25 per cent from last year’s level. 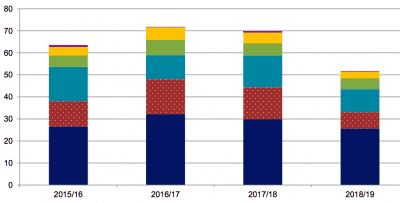 Russia is forecast again to be the top exporter despite its small crop, supplementing that number from a draw-down of carry-in stock.  In contrast the US is still expected to hold large stocks due to strong competition of low-priced wheat from the EU and the Black Sea region.

Between the July forecast and the previous month June forecast USDA made changes to its current crop 2017/18 world trade estimates. 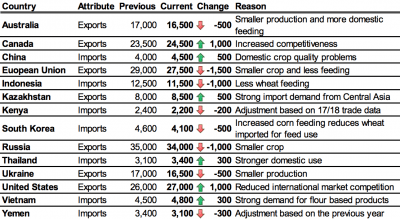