USING more precise soil data to tailor their fertiliser program has led one Queensland farm to cut their nitrogen fertiliser use by more than four per cent – saving money and reducing fertiliser wastage. 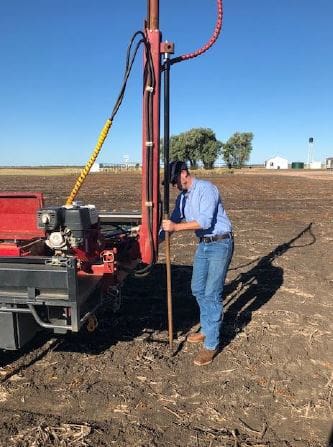 The result was an outcome of a large-scale project conducted across the Darling Downs by ag-tech company Precision Agriculture.

Leading a session at the Australian Farm Institute’s Digital Farmers Conference 2018 being held in Sydney today and tomorrow, Precision Agriculture chair, Mike Chaseling, said the project highlighted the opportunities for technology to deliver savings to farmers and optimise productivity.

Working with the Condamine Alliance NRM and funded by the Queensland Government, Precision Agriculture conducted a grid-based soil sampling program over more than 2500 hectares across eight properties, including the Warakirri Cropping property, ‘Myola’, where winter and summer crops are grown.

The sampling technique was unique because it was conducted to a depth of 90 centimetres on a four-hectare grid, using a pre-determined soil sampling plan to spatially map nutrient levels.

Based on the program’s results, last season the team at Myola applied nitrogen fertiliser at a rate of 85 kilograms per hectare across a total of 436ha, well below the traditional rate of 180–220kg/ha for a dryland sorghum crop.

“The grid sampling approach to generate a variable rate application saved us 40 tonnes of urea compared with a traditional single rate fertiliser program. We estimate this saved us in excess of 40 per cent of our fertiliser costs on this particular block,” Myola farm manager, Johan Smith, said.

Variable rate fertiliser spreading allows farmers to target specific fertiliser rates to different parts of a paddock based on soil requirements – the more precise the data, the better the result.

“By taking more soil samples in a systematic way, Precision Agriculture has helped landholders better understand the variability in their soil nitrogen levels and challenged their existing management practice whereby an entire paddock or even farm were managed as one,” Mr Chaseling said.

“The project has proven the current method of infrequent and random soil sampling is not representative of the spatial variability in soil nitrogen levels.”

Better targeting of nitrogen fertiliser can also reduce nutrient leaching and the conversion of nitrogen to nitrous oxide – a potent greenhouse gas with much higher global warming potential than carbon dioxide or methane.

Precision Agriculture has also received funding from the Victorian Government’s Virtual Centre for Climate Change Innovation to establish a pilot study site on a Gippsland dairy farm to measure how the practice affects nitrous oxide emissions.

“Our work helps farmers capture data on soil nutrients through soil sampling and converting this into soil maps to guide machinery to spread fertiliser at a variable rate,” Mr Chaseling said.

“This new research to better understand the environmental implications of variable rate fertiliser is a logical extension of our service work.”